Vietnam and Indonesia Coffee Crops Both Seen Down in 2013-14, Says USDA 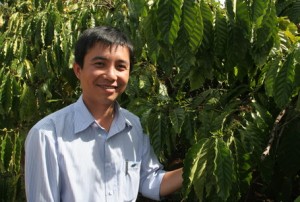 MEXICO CITY, Jul 3 (SpillingTheBeans)–The upcoming 2013-14 coffee harvest is expected to drop to lower levels in both Vietnam and Indonesia, which combined account for 22 to 25 percent of the world’s total coffee production, the U.S. Department of Agriculture said in its first annual forecast for the 2013-14 marketing year.

“Indonesia’s production is forecast to drop 1.3 million (60-kilogram) bags to 9.2 million. The vast majority of growing regions had drought conditions during the flowering period, followed by heavy rains that caused many developing cherries to drop before the harvest. As a result of lower exportable supplies, bean exports are forecast to decline 1.3 million bags to 5.6 million,” said the USDA in is coffee market report.

The 2012-13 harvest in Indonesia, the 3rd largest coffee producing country in the world in the last 5 years, also ended sharply below expectations because of weather complications. On top of harming the crop that also led to an increase in the number of small-holder coffee growers in Indonesia who chose to replace coffee with cocoa, which in recent years have provided more lucrative income to farmers. The 2012-13 harvest, which initially was forecast to yield between 11 and 11.6 million bags, instead ended at 10.5 million bags.

“Since 2007, the Indonesian Ministry of Agriculture has encouraged new plantings, area expansion, and better cultivation practices. However, these efforts have not yet significantly enhanced production,” said the USDA.

“Vietnam’s production is forecast at 24.8 million bags, down marginally as weather
related problems again stymied its growth trend. The beginning of the rainy season got off to a dry start, followed by below-average precipitation. Bean exports are forecast to decline 200,000 bags to 23.0 million, while consumption is expected to continue rising as the coffee consuming culture spreads,” said the USDA, adding that stock in Vietnam ended “weaker-than-anticipated” despite trade reports to the contrary.

Sign up to SpillingTheBeans weekly News Letter here COMPLETELY FOR FREE to stay tuned for our upcoming reports on the USDA market outlook for 2013-14 and much more analysis on production in origin, supply-demand trends and prices.