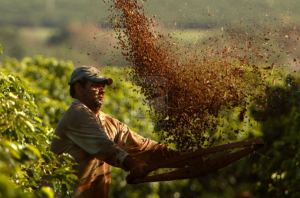 According to the Alliance for Coffee Excellence (ACE), Cândido Vladimir Ladeira Rosa – whose score of 94.05 points was enough to see him crowned winner – jumped out of his seat to accept the prestigious award. The international jury described the Bahia coffees as having prolonged honey and sugarcane sweetness with a lively, complex but refined acidity, with diverse fruit flavors and a long, sweet aftertaste.

More than 340 farms, representing 13 regions throughout Brazil, submitted samples into the competition. The first COE was held in Brazil 15 years ago, and the awards returned to its Brazilian origins to celebrate the centenial.
“The milestone competition created fierce rivalry among Brazil’s finest coffee farmers, adding anticipation and excitement, as the audience waited to hear which coffee regions would be honored this year,” said ACE, in a statement.

These rare coffees will be shipped from Brazil within the next two weeks. Coffee companies can bid for the chance to own the exclusive 100th Cup of Excellence coffees on 26 November during the Internet auction.