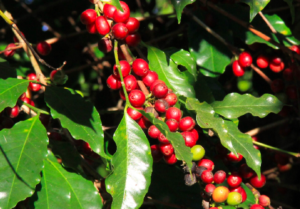 JAN 20 (SpillingTheBeans)–Brazil’s Crop Supply Agency Conab has pegged the new 2017-18 harvest in the world’s biggest grower and exporter to drop by as much as 15 percent to as low as 43.65 million 60-kilogram bags. This is in line with expectations for a significant drop in production in this upcoming harvest, which SpillingTheBeans last November forecast to reach between 41 and 43 million bags.

The drop is mostly attributed to the fact that most of the Brazilian producing regions this year is in the off-cycle where yields are lower as trees recover from the 2016-17 bumper crop which Conab estimated to have yielded 51.369 million bags. In the Cerrado region of north-eastern Minas Gerais, for instance, the drop in production is expected to be as high as 40 percent. Harvesting of the new Brazil crop traditionally starts between late April and mid-May.

Releasing its first forecast for the new cycle, Conab — which is the Brazil Agricultural Ministry’s official crop forecasting agency — said production in the 2017-18 crop cycle is estimated to reach between 43.65 million and 47.50 million 60-kilogram bags of coffee, while Arabica output should reach between 35.0 million and 37.8 million bags.

The production of Conilon, or Robusta, meanwhile, is pegged to reach between 8.64 and 9.63 million bags “based on the projection that productivity should start to recover after the severe rain shortage of recent years,” said Conab in the report released on Jan 18th.

This would — if these figures materialize and the remainder of the flowering and development period of the new crop on trees remains unharmed by weather — represent a modest recovery from last year’s harvest of 7.99 million bags of robusta. An eventual recovery would primarily be thanks to a big recovery in the conilon crop in the northern state of Bahia, which is projected to produce between 1.65 million and 1.81 million bags in the new crop, compared to robusta output of 826,100 bags in the now now completed 2016-17 harvest which was hit by a massive drought.

But Conab also said that Brazil’s main robusta growing state of Espirito Santo continues to be severely affected by four years of drought — Conilon production in Espirito Santo is projected to reach between 4.6 million and 5.3 million bags, possibly dipping below last year’s disaster crop of 5.035 million bags, Conab said in the report.

“The overall Conilon crop continues to be very vulnerable to weather, as Espirito Santo, which is Brazil’s biggest robusta growing state, could see production fall for a 5th consecutive harvest cycle as drought damage continues to cut yields short and complicate the recovery process,” said Maja Wallengren, author and owner of SpillingTheBeans, and an independent coffee analyst and writer.