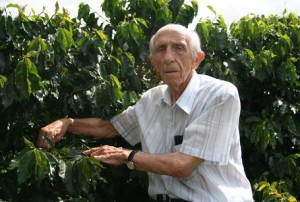 Evidence is growing fast that coffee production from Brazil, the world’s largest growers, is not set for another bumper crop in the next 2014-15 crop cycle, for which picking will start in late April. After three major forecasts for lower than expected crops in both the current 2013-14, as well as the next 2014-15 harvest in Brazil, the Arabica futures market in New York “has generally embraced these lower expectations,” one trader told SpillingTheBeans.

In this latest report from out friends at Bloomberg, Brazil’s Cooparaiso cooperative reports that their growers are expecting a “Stable Coffee Crop” in the next cycle.

Sao Paulo, Jan 14 (Bloomberg)–The coffee crop at Cooparaiso, a producers’ cooperative in Brazil’s leading arabica-producing state, will be little changed from a year earlier even as trees enter the higher-yielding half of a two-year cycle.

Farmers at the Sao Sebastiao do Paraiso-based cooperative in the state of Minas Gerais will produce about 3 million bags of coffee this year, Jose Rogerio Lara, the company’s executive vice president, said in a telephone interview yesterday. That’s similar to last year’s 3 million in 2013 as reduced husbandry and tired trees offset the boost normally gained from the higher-yielding half of the cycle, he said.

“From our experience here in southern Minas, the harvest really won’t be as wonderful as people were saying in the beginning,” Lara said. “We are coming from two big harvests and to repeat such performance, the plants are tired.”

Arabica coffee futures traded in New York fell 23 percent last year as global supplies outpaced demand. That was the third annual decline and the longest slump since 1993. Growers in Brazil harvested 49.2 million bags in 2013, a record for a year in which trees are in the lower-yielding half of the cycle, says Conab, the government’s crop-forecasting agency.

Production in southern Minas Gerais will probably be capped by higher rates of skeletonizing, a hard-pruning technique applied in Brazil, Lara said. Growers are increasing the practice to reduce costs, he said. While the ideal skeletonizing rate is about 20 percent to 25 percent of one’s crops, the level at Cooparaiso’s growing area is about 30 percent, according to Lara.

“Another aspect that we notice is, as prices were bad last year, that the level of fertilization and inputs and the level of pesticides applied fell in volume terms,” Lara said. “Producers are holding back on husbandry and this will have consequences in the future,” he said. A bigger drop in production will probably come next year as trees may still benefit this year from previous caretaking.

Arabica futures rallied 8.3 percent this year partly as traders cut estimates of Brazil’s crop. Volcafe Ltd., the Wintherthur, Switzerland-based unit of trader ED&F Man Holdings Ltd., estimated Brazil’s harvest at 51 million bags, below production potential of 60 million. Citigroup Inc. cut its forecast for the crop by as much as 10 percent and Macquarie Group Ltd. said a crop of 55 million to 57 million bags was more likely than its previous forecast of 58.5 million bags.

“This slight recovery in prices brings some light, but most growers are still apprehensive, trying to reduce costs,” Lara said. “The sentiment is still one of caution.”

Arabica coffee is grown mainly in Latin America and favored for specialty drinks such as those made by Starbucks Corp. Cooparaiso, founded in 1960, has almost 6,000 growers, according to information on its website.