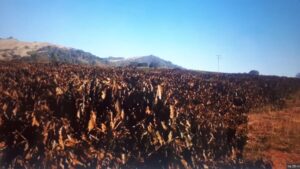 *UPDATE, 9:50p.m. EDT–This weekend’s intense cold front has hit coffee regions across Brazil, the world’s largest grower and exporter, much more widely from South to North and with much colder temperatures than had been expected, local press Noticias Agricolas reported. Coffee regions hit with frost damage include Nova Resende and Divisa Nova in Southern Minas, the Patrocinio area in the Cerrado region, Pinhalao in Parana and Sarutaia in Sao Paulo.

*UPDATE, 8:41p.m. EDT–Brazil’s COOXUPE, the world’s largest coffee cooperative based in the Southern Minas coffee town of Guaxupe, has confirmed that “numerous coffee regions” within the Cooxupe growing region and including the coffee municipality of Nova Resende has been affected by the weekend’s frost attack, Brazil’s Canal Rural reported late Sunday. The frost damage will cause some losses to the current 2019-20 harvest but could have more severe impact on the next 2020-21 cycle, for which coffee farms hit with frost will not be able to recover in time for the onset of flowering in early October. The extensive reach of the frost attack is expected to have taken coffee traders with surprise and Arabica prices on the ICE futures market in New York are likely to move higher on Monday.

“The thing is the market went home comfy Friday discarding a frost and all of a sudden everything went pitch dark down there in coffee areas overnight so what is going to be the reaction tomorrow?” veteran coffee analyst Alberto Ferracuti asked, talking to SpillingTheBeans.

JULY 7, 2019–5.09p.m. EDT–Coffee producing areas in key growing regions in Brazil have suffered frost damage from the last few days of extreme cold, and the first pictures confirming this and showing evidence of the damage were published late Sunday afternoon local time by press in Brazil, the world’s largest coffee grower and exporter.

An exclusive piece by Brazil’s Revista Cafeicultura shows farms in Brazil’s top growing coffee region of Southern Minas and neighboring Sao Paulo state completely burned by the frost and report that this “strong damage” with certainty will cause losses to the new 2019-20 crop, for which harvesting is currently underway. And the frost damage could get worse as weather forecasts call for the current intense cold front to CONTINUE for at least two days more through Tuesday.

This weekend’s frost attack came in bigger and more widespread as anticipated by the market and analysts were quick to discuss just how much this supprise effect of the extend frost damagage might be able to inflict on Arabica prices when the markets opens for trading after the 4th of July weekend holiday mood on Monday.

Forecasts for the current cold front could bring even more trouble to the new Brazil crop, as the extreme cold is forecast to continue for at least two days more through Tuesday, according to weather forecasts by Agro-Association Fundacao ABC; 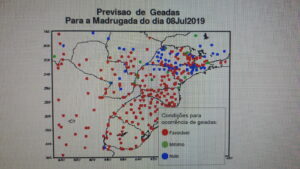 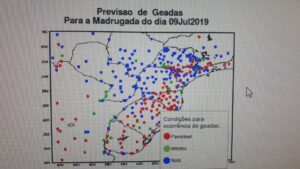 See the full report from SMA Fundacao ABC at; http://sma.fundacaoabc.org/previsao_tempo/geada

Stay tuned for more updates as SpillingTheBeans continues to monitor events and as we get more details from our coffee friends in Brazil.
-0-

FASCINATING FACT – Why Is The U.S. Just SO Obsessed With Coffee In Its History?
MARKET INSIGHT: Sep Arabica Coffee Surges 3.55 Cents to$1.1465 In Early Trade Jul 8 On Brazil Frost