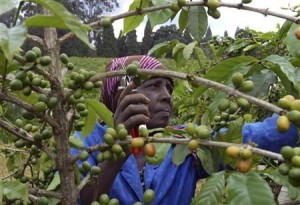 “After extensive dry weather, farmers are enjoying rainfall. But robusta coffee harvest should be between 20,000 and 25,000 tons this season,” Mr. Akoouafane said. Farmers said output could have been better if dry weather had not stretched between November 2014-May 2015.

NCCB figures indicate that by July 2015–nine months into the current season–Cameroon’s robusta exports stood at 16,387 tons, up from 12,119 tons in the same period the previous season, according to NCCB data.

“Although we’re seeing this rise in production and exports, robusta coffee production may not reach the expected 35,000-40,000 tons this year,” said Andre Belebenie, president of the National Association of Cocoa and Coffee Producers in Cameroon. Cameroon’s robusta season officially runs between December and November.

14 Unexpected Uses For Your Leftover Coffee (Even The Drips And Dregs!)
MICE2015 sees highest daily record attendance figures to date