Coffee News LIVE From Indonesia, SpillingTheBeans is Back in The Sumatra Jungles

In honor of SpillingTheBeans last Coffee Safari of 2015 this month to Indonesia, we are proud to re-publish this Special Report from two years ago. During this visit SpillingTheBeans’ author and owner, independent coffee analyst and global coffee reporter Maja Wallengren also known as “The Indiana Jones of Coffee”, will make crop visits across North Sumatra’s coffee regions from Takengon in Aceh to Mandheling and Sidikalang, then on to Bali for a special report on the famous origins of Kopi Luwak. Indonesia has been one of the world’s coffee producing countries hardest hit by climate change in recent years, yet local coffee consumption is BOOMING with some industry estimates saying local demand is moving toward a stunning 6 million bags. From the new harvest to the local consumption and the ethics and tradition behind Luwak-civit coffee, we will undertake an in-depth field investigation while here in Indonesia during a full 12 days of intense coffee travels. Stay tuned for more updates from Indonesia soon HERE on the world’s fastest growing blog in coffee and, as always, Happy Coffee Drinking!

*STAY TUNED, all our new reports and articles from this TRIP will start coming up here in the next few weeks and months, everything you ever wanted to know about Indonesia 🙂

Indonesia has for many years been the joker in international coffee statistics and for both the last 2012-13 harvest as well as the new 2013-14 this is no exemption. In years when coffee production was expected to come in at some-what disappointing levels, coffee exports would suddenly surge well above expectations. And in years when everything pointed to healthy yields, reports of oversold crops and exporters scrambling to comply with contracts would suddenly dominate the market. Most analysts and market players have up until the second quarter of 2013 insisted that Indonesia’s 2012-13 harvest was producing a near record of between 10.5 to 11 million 60-kilogram bags, but as the harvest has been completed, evidence is growing of a much lower volume after multiple complications from weather. And the booming local market has furthermore seen domestic consumption increasingly cut into the amount of coffee available for exports.

As always, we welcome your comments. Happy Coffee Drinking! 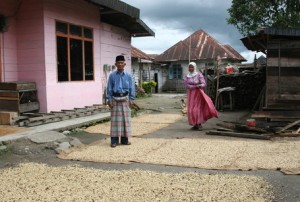 SINGAPORE, Jan 16 (Reuters) – Harvesting of a minor crop has started on Indonesia’s main coffee growing island of Sumatra but heavy rains have hurt quality, while Vietnamese robustas have been sold at smaller discounts as roasters step up purchases, dealers said on Thursday.

Farmers and exporters in top robusta producer Vietnam were offering more beans to raise cash ahead of the Tet festival, which celebrates the Lunar New Year later this month. But demand from roasters helped prices defy pressure from rising supply.

Trade in second-largest robusta producer Indonesia was sluggish as farmers held back beans, waiting for domestic prices to improve. COFID-G4-LAM

“I can say that people are coming to buy Vietnamese beans. We see shippers willing to offer more forward shipments. They want to sell before Tet to get money,” said a dealer in Singapore who trades Vietnamese and Indonesian robustas.

“We do see more offers in bigger quantities.”

Grade 2, 5 percent black and broken beans were traded at $10 a tonne below London futures, while offers were on a par with Liffe. Last week, the beans were offered at discounts of $25 to $30 a tonne to futures.

Higher-quality robustas usually purchased by Nestle , the world’s biggest food group, were traded at premiums of $25, according to dealers.

The crop in Vietnam is forecast to have yielded up to 29 million 60-kilogram bags, based on traders’ estimates, up from around 25 million bags in the 2012/2013 season that ended in September.

Sumatran 4,80 defect robustas stood at premiums of $80 to London futures, within sight of last week’s range of $40 to $80, with no deals. A minor crop, or “fly crop”, began in Sumatra, with the main harvest expected to start in March or April.

Indonesia’s output in 2012/13 was estimated to have risen 74.7 percent to 12.7 million bags, according to the International Coffee Organization.

“Beans from the fly crop are available but the quality is very bad because farmers can’t dry it. It has been raining a lot,” said an exporter in Sumatra.

“Beans from the previous crop are still around but the thing is that farmers and suppliers are quoting high premiums of $40. Exporters are only willing to buy at zero to $20 premiums.”

Indonesia’s coffee output is likely to see a modest increase in the crop year to September 2014, but strong domestic demand will boost consumption by nearly a third, according to a Reuters survey.

Indonesian beans could slip next week as Vietnam offers competitive prices. (Editing by Joseph Radford and Himani Sarkar)
What do you think, am I off track with my comments or what is really going on?
-0-