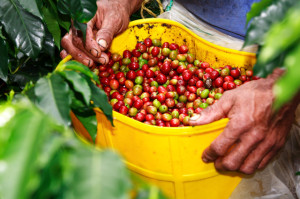 JUL 8, 2015 (Reuters)–Colombia’s coffee regions have been drier than usual for weeks as an El Nino weather anomaly takes effect and the crop will see less rainfall from now until harvest time, potentially limiting its size in a few areas, agronomists say.

The National Coffee Federation’s top agronomist, Carlos Armando Uribe, said Wednesday the entity’s estimate of a 12.5-13 million 60-kg bag crop was still realistic though the drier conditions would increase the threat of crop damage from pests.

“It’s likely it will rain less but it will rain. In some areas that have soils with good moisture retention, there is no risk,” Uribe said, referring to the central Andean region on which most of Colombia’s coffee is grown.

Soils in more northerly regions tend to dry out more quickly without a top-up of moisture, he said, which could reduce output there if beans are not able to fill out to full size by the time the most intense harvesting period starts from September.

Agustin Giraldo Gomez, the Federation’s representative for the northerly provinces of Cesar and La Guajira, which grow nearly a quarter of a million bags between them, noted on Wednesday it has not rained there for two months, leaving growers “very worried”.

The long-expected El Nino is a weather pattern linked to the warming of the Pacific Ocean which tends to leave Colombia and Central America drier, while drenching farming regions in the world top coffee grower Brazil.

Colombia is the world’s top producer of smooth-tasting washed arabica coffee and output has been climbing steadily in the last few years after nationwide replanting of trees resistant to roya fungus that had devastated prior crops.

Meteorologist Alexander Rojas from state weather forecaster Ideam, on Tuesday said soil humidity in most Colombian coffee zones from June 1-20 was either semi-dry or dry and that July, already usually quite arid, will see even less rain this year.

The El Nino has been mild so far but is expected to intensify by the start of next year, which could be beneficial to next year’s crop by creating conditions of hydric stress which cause trees to flower more, if rains follow soon after.

Drier conditions will also make it harder for growers to fight coffee-bean-eating berry borer insects which flourish in the absence of rain. There has been an uptick in infestations in the last year though levels are still not considered alarming.