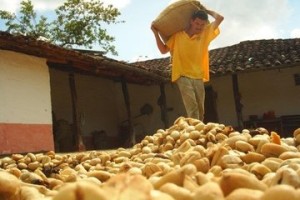 Colombia is one of less than a handful of coffee producing countries in the world that has two crops during the year, the main harvest that starts with the international crop cycle on Oct. 1st and for which picking continues until the end of January or early February, and the mitaca, or mid-crop, that is harvest from between the end of March or early April through August. Traditionally the main harvest would account for between 65 and 70 percent of the total annual production, but since the 2001-2003 coffee crisis more expensive lands in the central Eje Cafetero region and Antioquia have increasingly been going out of coffee and new coffee has primarily been planted in Huila in the south. Due to this change the mitaca crop, that is the dominating harvest in southern Colombia, is today producing between 40 and 45 percent of the total crop and the overall production pattern is increasingly spread out during the year.