This report was published by the International Coffee Organization a few months back, but SpillingTheBeans have been in touch with our sources across East and West Africa who tell us that as of today Jan. 20th, 2014, the situation has not changed and the situation remains of grave concern to the region’s growers, who account for production of between 14 and 15 million 60-kilogram bags of coffee in an average harvest. 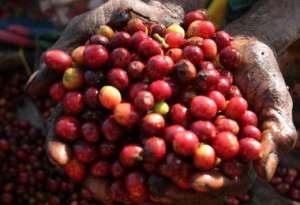 SEP. 9–12, 2013 (ICO)–The Head of the Ugandan delegation has expressed concern regarding the outbreak of the black coffee twig borer (BCTB) which has reached epidemic levels in Uganda with the potential to spread within East and Central Africa, which could have a grave impact on the livelihoods of the coffee growers. We, the affected countries, hereby appeal to the Council to note this and take measures to support national and regional strategies to combat this infestation;

The current epidemic of black twig borer in coffee is affecting Burundi, the Central
African Republic, the Democratic Republic of Congo, Kenya, Tanzania and Uganda. In
Uganda, the incidence has been registered at 8.6%, causing a loss of 40% of the affected
crop. It is the worst seen since this pest appeared in Africa in 1993, and has led Uganda to
declare a phytosanitary emergency so as to trigger the necessary national measures to
combat the black coffee twig borer;

Given the importance of coffee growing in the region, which has more than 2 million
coffee growers and directly provides a livelihood for more than 8 million people in East and
Central Africa, this epidemic is expected to have a profound impact on the societies and
economies of the region.

It is estimated that US$42 million worth of Uganda’s coffee (about 0.27 million bags
of exportable coffee in Uganda) have already been lost as a result of the black coffee twig
borer in coffee year 2012-13, and this will bring about a systematic reduction in the region’s
production as from coffee year 2013-14; Governments and the private coffee sector in the
region, together are making joint efforts to address this,

1. That ICO Members show leadership in addressing this important issue and support
for national actions in Uganda, as well as those in Burundi, the Central African Republic, the
Democratic Republic of Congo, Kenya and Tanzania being undertaken to combat the black
coffee twig borer in Africa.

2. To call on Members of the international community, through the relevant
cooperation mechanisms, to offer assistance to the affected countries by, among other
things, technical knowledge, exchange of information, best practices and management of
the pest.

3. To ask the ICO Secretariat to support countries affected to address the crisis caused
by the black coffee twig borer.

Everyone Is Getting Rich in the Coffee Business: Starbucks, Dunkin’ Brands, and Green Mountain Coffe
HARVEST ANALYSIS: Guatemala’s 2013-14 Coffee Crop To Drop As Low As 2.7M Bags, Smallest In 30 Years