FASCINATING FACT – Why Is The U.S. Just SO Obsessed With Coffee In Its History? 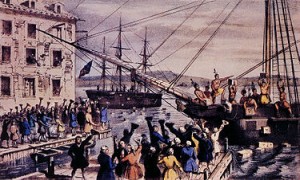 In the spirit of the 4th of July weekend in the U.S. we’ll take another look at why coffee is SO important to the U.S., don’t miss this fascinating piece of US and Coffee history!

FASCINATING FACT – Why Does Coffee Matter to the US July 4 Holiday?

There is a reason for why coffee remains America’s favorite drink beyond the caffeine rush. Coffee drinking plays a huge symbolic role in the U.S. independence campaign undeniably linked to one of the key events in the lead up to U.S. independence from British Colonial rule on July 4th, 1776: The Boston Tea Party.

Growing increasingly impatient with heavy taxation by the British empire on all kind of goods – and on tea imports monopolized by the East India Company in particular – a group of some 150 U.S. colonists boarded three ships arriving with tea into the port of Boston in the early hours of Dec. 16th in 1773 and dumped all 342 chests of tea into the waters in the harbor.

The incident sparked a wave of similar protests up and down East Coast United States and market the culmination of a resistance movement throughout British America which become symbolic against everything related to British rule. As the standoff evolved into full fledged crisis and the crisis continued to escalate over the next two years, it led to the beginning og the American Revolutionary War near Boston in 1775.

As a DIRECT RESULT of the refusal to allow for any more taxed tea imports to be received in U.S. ports, the U.S. independent movement encouraged Americans to DRINK COFFEE INSTEAD and hence the early foundation started for what would make the U.S. the biggest coffee cosumer in the world. So to all you coffee lovers out there celebrating Independence Day today, remember, drink coffee!

Happy 4th of July to you All!