When it comes to coffee trading and futures prices in particular there is an impressive amount of hula-yoho-bogus manipulative information spread in and by the market and circulated for pure speculative purpose. So when we come across REALLY GREAT information about prices and historical data that supports this, we are only happy to share it here, like this GREAT site showing coffee prices 1976-2016.

In what is truly fascinating about this graph and site here is that they actually get both the time and exact price right as to when Arabica coffee reach the highest level ever recorded? 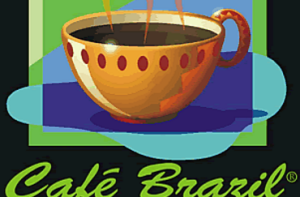 Historically, Coffee reached an all time high of 339.86 in April of 1977 at the height of one of the most damaging frosts ever to hit in Brazil. Historic lows were set at 42.50 cents per pound in October of 2001 (intra-day trading actually reached 0.38 c/lb) at the height of the “Coffee Crisis” when massive over-production hit the market. See the fascinating track record of the last 30 years of coffee prices here: 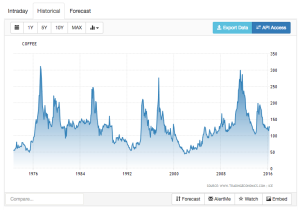 Brazil is the biggest producer and exporter of coffee in the world accounting for more than 33 percent of total production in the last few years. Vietnam, Colombia, Indonesia, Ethiopia, Honduras, India, Peru, Guatemala, Mexico and Uganda are also major or significant producers.

Coffee futures contracts that trade on the Inter Continental Exchange (ICE) are the world benchmark for Arabica coffee. The word “coffee” is believed to be come from Kaffa, Ehtiopia, where coffee originated sometime around the 6th Century.

Derived from the coffee bean, it was not well-received, and at one time was even banned in Turkey and Egypt. The demand for coffee gradually increased until it had become one of the most popular beverages in the world.

See all the pricing and trading chart details here: http://www.tradingeconomics.com/commodity/coffee
-0-