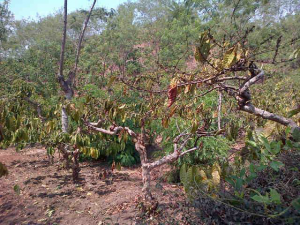 AUG 1 (SpillingTheBeans)–Indonesia’s coffee production in the 2013-14 crop cycle, for which harvesting started in April, is expected to fall between 20 percent and 25 percent from output in the 2012-13 harvest as heavy rains continues to cause damage to the new crop, Reuters in Jakarta reported this week.

“There has been too much rain this year, which is causing coffee fruits to fall from their trees and die,” Reuters quoted Moenardji Soedargo as saying. Soedargo is the chief operating officer at Sumatra-based exporters PT Aneka Coffee Industry and serves as an adviser to the Indonesia Coffee Exporters Association (GAEKI).

He said the damage was not just from the excessive rains to new mature cherries ready to be harvested, but also from that “coffee flowers died and fell” of trees earlier in the cycle.

While Indonesia according to Soedargo in the last 2012-13 harvest produced 11.7 million bags, the Association of Indonesian Coffee Exporters (AEKI) initially pegged the last crop to have yielded 10.8 million bags and said output in the new harvest was likely to be similar.

Recent data from Indonesia, however, has shown the damage to the last crop from extensive drought across the Indonesian coffee growing areas was much more severe than initially projected. From industry groups and exporters in Indonesia to the local office of the U.S. Department of Agriculture in Jakarta consensus is building that the last harvest yielded a maximum production of between 9.7 and 10.2 million bags.

Indonesian coffee exports, meanwhile, were reported to close at 6.1 million bags for the 2012-13 crop cycle, which in Indonesia runs from April through March. This, combined with imports of between 800,000 to 1.0 million bags in green beans from Vietnam used by the local soluble industry in Indonesia, makes it statistically impossible for the Indonesian crop to have reached much more than 9 or 9.5 million bags as local consumption last year was between 3 million and 4 million bags.

For more on Indonesia, see the latest HARVEST ANALYSIS published earlier this week on the last and new crops “No Signs or Evidence of Record Coffee Crop in Indonesia”
http://spilling-the-beans.net/harvest-insight-rains-cause-more-havoc-to-indonesia-coffee-both-12-13-and-13-14-crops-down/