JUNE 6, 2017–One of the tiniest of the world’s tiny coffee islands, Dominica in the Caribbean has laid out big plans for a major revival of the coffee industry, reports the online daily the Caribbean Journal.

Dominica, which is also known as the “Nature Island” in the Caribbean, has begun construction on a coffee processing plant in Portsmouth in the north of the island nation that will have the capacity to process 2,000 metric tons of beans per year. The coffee is all to be sourced from Dominican plantations and thanks to “friendship funds” received in the late years of the Chavez administration in Venezuela, the bilateral project is to see the cultivation of some 800 hectares of coffee on the island.

“In the 1970’s coffee was a burgeoning industry in Dominica but over time neglect and a focus on the banana industry led to interest in coffee declining,” said Edward Lambert.

The Journal reports that the office of Dominica Prime Minister Roosevelt Skerrit has confirmed that plans are now underway to identify where the additional coffee is going to be grown, which will increase the local production multiple times from the current acreage of less than 40 hectares. 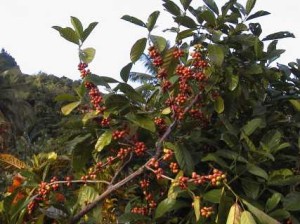 “We know that we have lands that are capable of growing the finest Arabica coffee which is the type of coffee that has given Jamaica its great name,” Edward Lambert, personal assistant to the Prime Minister, told the Journal. “Blue mountain coffee is really Arabica coffee grown at a certain altitude, and we have the ideal altitude in Dominica for growing that coffee.”

One local company, Nature Island Coffee, has formed a joint venture with the state-owned Venezuela Coffee Corporation. The Venezuelan government is funding the construction of the coffee plant worth about $11 million USD.