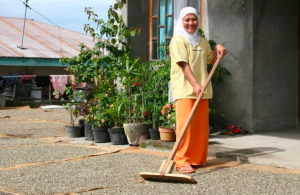 BY MAJA WALLENGREN FOR GCR

With a rapidly growing middle class, Indonesia’s coffee consumption is on the rise. GCR Mag examines the ever-expanding South-East Asian country’s market.
Modern coffee culture has been present in Indonesia since the early 1990s, and when it comes to emerging markets and the potential for consumer growth, few countries in the world can lay claim to economic figures as exciting as Indonesia.
Spread over 17,500 islands, the South-East Asian country is a giant by many measures, from its rank as the fourth most populous country in the world to being the world’s 16th largest economy.
Home to a population of close to 260 million people, Indonesia also boasts one of the world’s fastest expanding middle classes, which today accounts for over 63 per cent of the population. This is all good news to the local coffee industry.
“We continue to see the local coffee culture growing in very healthy terms and domestic consumption in Indonesia is projected to increase 14 per cent this year as the rising incomes in the expanding middle class continues to support coffee drinking habits,” says Irfan Anwar, Chairman of the Indonesian Coffee Exporters Association, AEKI.
“Since 2010 we have seen the total coffee consumption in Indonesia double in overall volume as well as in per capita consumption, which was estimated to be 1.36 kilograms per person in 2015 and is expected to rise to 1.54 kilogram in 2016,” Anwar tells GCR Mag.
These figures compare to a per capita consumption of just 0.80 kilogram in 2010, or a total consumption of 3.17 million bags at the time, with consumption in 2015 estimated to have reached 5.83 million bags, he says.
If the predictions hold, the South-East Asian nation is set to see consumption reach as much as 6.67 million bags in 2016, and – according to the International Coffee Organization – this compares to total consumption in Indonesia in 2000 of 1.66 million bags, a surge of over 300 percent or 5 million bags.
Most market observers and analysts are saying that demand has increased fast, although not all believe the consumption figures are as high as those quoted by AEKI.

The US Department for Agriculture said in a 2015 report that consumption in Indonesia is pegged at 3.1 million bags for the 2015-16 crop year, but recognises the strong growth driven by the local café sector.
Conflicting figures and estimates for both output and consumption in producing countries is not a new phenomenon, but in Indonesia an under-reported number for local consumption goes a long way to explaining some of the discrepancies in international statistics, local industry officials and analysts have said.