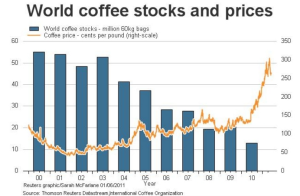 From the March 2014 issue.
Poor weather is taking its toll on Brazilian crops, while positive economic sentiment is good news for the consumption. The result could be the perfect storm for another drop in stock.
Coffee deficitIt’s been a hard fall from the top for Arabica prices over the past two years.
Long gone are the glory days of US$3.19 a pound in the New York ICE market, which marked a 14-year-high record in May of 2011. While the fall was slow, with Arabica continuing to trade at over $2 per pound for a full year, the party was over when the positive crop reports started flowing in.
GCR first reported in August 2013 that the current and future crops in Brazil were set to fall short of expectations, following multiple weather issues. It’s looking now like those warnings are coming to life.