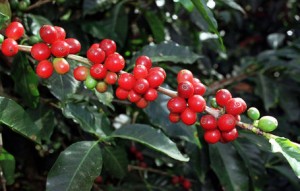 JAN 27 (SpillingTheBeans)–Colombia’s new 2013-14 coffee harvest is expected to yield 11 million 60-kilogram bags and take Colombian coffee production back to double digits for the first time in five years, an official at the country’s National Federation Of Coffee Growers told SpillingTheBeans on Monday.

If the 11-million bag figure materialize this will represent a rise of 11 percent from the 9.9 million bags produced in the last 2012-13 Colombian harvest. That harvest was the first since the 2007-08 cycle where output got out of the range deadlocked between 7 and 8.5 million bags since four consecutive years with disastrous weather that led to severely damaged crops through a combination of lower yields, rust and broca pests.

Harvesting of the new 2013-14 main crop, for which picking started in late September, is now coming to an end across Colombia and based on results to date the new crop is still within the potential to reach 11 million bags. While this by all counts represents a healthy recovery from the last five years this is still some 2 million bags below the volumes traditionally seen in Colombia during the 1990s.

The renovation of farms in recent years will without a doubt continue to provide for a bigger crop potential, but the ongoing climate change and erratic weather will similarly continue to pose a bigger concern to the Colombian producers. This is because the kind of weather that benefits the main crop normally works against the producers growing their coffee mostly in the mitaca season, or the midcrop, and vice versa.

Hence even if the new crop at this point looks healthy, it has to be observed that flowering for the mitaca is still only in the final stages and it will be another 2 to 3 months before the world will know with certainty just what promise the 2014 mitaca crop will hold in store. If excessive dryness and below average rainfall prevail from mid-December through February, when the cherry development goes through the main bean formation stage, even a 10 million-bags forecast could quickly become a distant dream.

But as of now, SpillingTheBeans cautiously agree with the Fedecafe forecast for a crop of 11 million bags to be within sight in this current 2013-14 harvest.