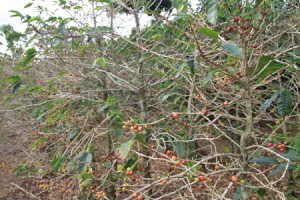 The dramatic decline is the culmination of four years with extreme weather causing havoc in coffee producing regions across the six countries with the negative effects of climate change complicating efforts for the region’s growers to recover from the worst outbreak of the coffee rust fungus which first started in July 2012 and which devastated the region.

The figure compares to an average of 17.3 million bags in the first five years of the decade and production between 18 and 19 million bags for Mexico and Central America at the turn of the Millennium in 1999-2000 after which the region plunged into over 10 years of social and economic crisis because of low coffee prices.

“Elevated temperatures blamed on El Niño were cited in an unexpected drop in Nicaraguan output to a six-year low,” said the report, while Agrimoney.com added output in Mexico slumped by 29 percent to the lowest figure in over 50 years with the national harvest expected to yield no more than 2.25 million bags in the 2015-16 crop cycle.

“Mexico has represented the biggest disappointment in the region – which grows primarily washed arabica coffee beans – with its growers still struggling against an outbreak of coffee rust, which also curtailed the El Salvador harvest,” said Agrimoney.com, adding that rust will continue to affect the Mexican harvest in the next 2016-17 cycle.

As for El Salvador, the report said that “coffee rust is wreaking continued damage on El Salvador plantations” with the latest harvest hurt by “severe drought” caused by El Nino as well.

Cautious optimism, however, prevails for a small recovery of 500,000 bags to a total of 16.14 million bags in the 2016-17 harvest — for which the flowering period is ending this month — if current weather and prospects for bean development during the next six months are not interrupted of suffer from more erratic weather.

“Producers in Mexico indicate the coffee production for 2016-17 is forecast to grow slightly as a result of efforts from growers to control coffee rust and renovation of plantations,” Agrimoney.com quoted the USDA, which has forecast production in Mexico to rise by 50,000 bags in the next cycle which starts on Oct. 1st. increase in output.

“The increase in output will allow a recovery in Central American coffee exports to 14.4m bags in 2016-17 – from current season levels, expected at a little under 14m bags. Even so, next season’s shipments will remain below the average of 15.2m bags in the five years to 2014-15,” said the report.

COFFEE MARKET TECH TAKE: “I Am Bullish On The Coffee Market” Says Futures Trader
TECH TAKE: With Brazil In Frost Season “Coffee May Hold A Weather Premium For A Few More Weeks”