It may be hard to imagine for coffee lovers today, but there was once a time Seattle actually did not know much about Italian-style coffee. It was during this time – in 1977 – when California native Kent Bakke bought a sandwich shop in the city – now the home of Starbucks and widely regarded as the coffee capital of the United States – and inherited one of the few espresso machines known to be in the city at the time. 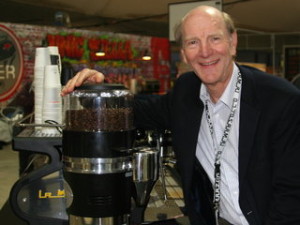 One of Italy’s oldest espresso machine makers, La Marzocco, has taken their handmade machines to markets across the world and now the company sees an opportunity for further growth down under.

But as hard it may seem to coffee lovers across the world, there once was a time Seattle actually did not know much about Italian-style coffee. At the time Bakke bought his first cafe and with that one of only a handful of espresso machines known to be in Seattle at the time most people in the coffee business didn’t even know how to operate espresso machines.

After a slow start just trying to figure out how the vertical brass coffee maker even worked – Kent soon realised the potential in this novel way of making coffee and set about changing the culture in his adopted city.

“It was the first espresso machine I had ever seen and I had no idea how it worked, but after a while I thought we should try to start importing these machines to the United States,” Kent told BeanScene Magazine in an exclusive interview during the 2013 Melbourne International Coffee Expo last May.

A year later Kent found himself on a flight to Italy, trying to figure out how he could get more of the machines into the US.

After meeting with the Bambi family, who founded La Marzocco in Florence in 1927, he ended up bringing both theirs and the CMA espresso machine brands back with him.

“Back in Seattle it took me a year to sell the first machine,” says Kent. “People just had no idea what espresso was at the time. But then in the early 1980s Starbucks started to get more attention, like food and wine in general.”

Today, Kent is the CEO of La Marzocco International, a US holding company which has a 90 per cent share in the Italian company, which oversees the business throughout the world. He regularly travels internationally and tries to meet with customers around the world as often as possible, but the journey to becoming the global face of the Italian company took more than 20 years since that first encounter in Florence.

In the early 1990s the Starbucks latte revolution was established, and everybody, not just in Seattle, but across the US, was getting hooked on espresso and the other Italian-based coffee beverages. As Starbucks aggressively expanded its business in the US, the market for machinery and equipment such as La Marzocco experienced a massive growth spurt.

“Starbucks brought a level of professionalism and consistency both on the customer service level, the stores and the product itself, which previously had never existed,” Kent says. “It opened up a new market by setting a standard for what you had to do in the coffee business.”

By 1994 Kent had put a team together that looked at how the company could set up production and manufacturing of their machines in the US in order to be able to cater to the continuing Starbucks expansion. Once again he travelled to Florence, this time to ensure …

To read the article in full, see the June issue of BeanScene.