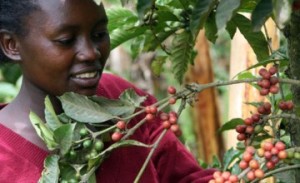 FEB 5, 2014 (Reuters)–Kenya expects its coffee export earnings to dip by 3 percent in the 2013/14 (Oct-Sept) season, mainly weighed down by low global prices, the industry regulator said on Wednesday.

Kenya is a relatively small coffee grower compared with other producers, but its speciality coffee is known for its quality and is much in demand from roasters who blend it with coffees from other nations.

Isabella Nkonge, the Coffee Board of Kenya’s acting managing director, told Reuters in an emailed response that the regulator expected earnings of 18 billion shillings ($208.45 million) at a price of $210 per 50kg bag.

East Africa’s biggest economy earned around 18.5 billion shillings ($214.24 million) from exports of the commodity in 2012/13, down from a revised 27.1 billion a year earlier. Kenya has over the past year witnessed an overall decline in the value of its coffee, a trend officials blamed on quality concerns and improved crop supply in the global market.

Coffee exports were at one time Kenya’s leading foreign exchange earner, but mismanagement in the sector reduced output from a record 130,000 tonnes in 1987/88. Many small-scale coffee farmers disillusioned by poor earnings turned to other crops or sold land for real estate.

“The average prices decreased from $220 per 50-kg bag in 2012 to an average of $166 per bag in 2013. The quality of delivered coffee also continued to decline due to poor crop husbandry at the farm level,” Nkonge said. “Coffee prices may continue to be depressed due to the global production glut,” she said.

A surplus from top grower Brazil after two successive bumper crops helped drag down coffee prices over past year. Projections by the regulator showed Kenya is expected to produce 50,000 tonnes of coffee in 2013/14 up from 39,825 tonnes the previous season, buoyed by improved weather, better crop husbandry and bigger investment by farmers.