MARKET ANALYSIS: World Coffee Market Continues In Defecit and 2016-17 Could be Worse

JUNE 10–As coffee regions accounting for over 60 percent of the total harvest currently are being hit with frost, the figure may come down further. We are constantly evaluating all the data and information available from across the Brazil’s growing regions and will update the story regularly.

*JUNE 4–Back from an intense 12-day crop trip traveling 3000 km across Minas Gerais and parts of Sao Paulo, SpillingTheBeans can confirm a crop better than last year in Brazil but we are NO WHERE close to a record or even a big crop. Figures for Brazil’s new 2016-17 crop are RAPIDLY coming down, both because of persistent damage from the last three years drought to Arabica tress, but even more as of late because of massive damage to Brazil’s Arabica harvest ACROSS the key region of Southern Minas where between 30 and 50 percent of the new crop fell to the ground after extreme unseasonal heavy rains. At this point it is very difficult to see the new harvest producing more than between 47 million and 48 million bags.

*MAY 9–Market tries to break through $1.30/lb barrier, but bears still keep pressure on lower side. Vietnam is expecting the smallest crop in 4 or 5 years, Indonesia is AGAIN suffering severe El Nino effects, India’s new harvest is seen at a 19-year LOW and Brazil’s key Nr 2 coffee state of Espirito Santo still facing drought. Yet we still see prices at below $1.30 per pound and sharply below the cost of production. Roasters and coffee lovers beware, it’s time to buy coffee, the party is over!

The supply problem for the market is far from over. Even though forecasts for Brazil’s new 2016-17 harvest seem to agree that a bigger crop could be in sight as of next June — which would be welcome news after last year’s 2015-16 disaster crop, which ended as one of the smallest in a decade — the conilon (robusta) harvest in Brazil’s key Nr 2 growing state of Espirito Santo is STILL suffering from drought, now in its 4th consecutive crop cycle. Global consumption, meanwhile, has expanded by ASTOUNDING volumes. SpillingTheBeans are currently working on the latest number crushing, and it does not look good! Please stay tuned, we will be back with all the latest analysis and forecasts in the next weeks but until then you can brush up on the background still affecting the market here below and, YES, this article is AGAIN back on popular demand after SpillingTheBeans initially published this analysis in July, 2013 Sadly, however, the situation and data remains largely unchanged as far as the underlying fundamental issues affecting the supply chain are concerned and data points to continued and even more extensive problems for growers today than one and two years ago. Read on to learn why. 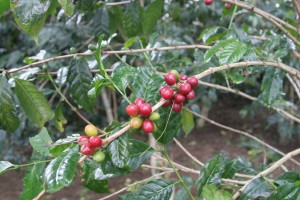 EXCLUSIVE SpillingTheBeans Market Analysis: Evidence is building fast to support that a deficit in the supply-demand balance is building in the world market coffee for the 2013-14 crop and marketing cycle that officially starts in October. During the last few weeks all the crop forecasts for the world’s main coffee growing countries have come down one after the other. This was made more obvious in the 1st official forecast for the 2013-14 year released by the U.S. Department of Agriculture (USDA) which not only confirmed that production across Central America, Mexico and Peru is going to fall by between 15 and 20 percent on average because of the ongoing outbreak of the crop pest rust fungus. But the USDA furthermore confirmed reports of significant weather damage to crops in both Vietnam and Indonesia, the world’s second and third largest producers, and both countries are now expected to see smaller than expected crops for the second consecutive years due to erratic weather.

(–Yes, SpillingTheBeans wrote this article in July, 2013 but, sadly, the situation and data remains unchanged, and if any, data points to even more problems for growers today than 5 months ago, including that most forecasts for Brazil’s both current 2013-14 and next 2014-15 crops have been revised down)

MARKET ANALYSIS: World Coffee Market Headed For New Deficit in Both 2014-15 And 2013-14 Crops
JUL 15, 2013 (SpillingTheBeans)–In breaking news today, leading Brazilian exporters and traders COMEXIM said it had been forced to reduce its forecast for the new Brazil harvest by a whopping 3.8 million 60-kilogram bags to a total of 49.4 million bags. The Santos-based trader took this desicion after a careful evaluation of the now completed Connillon harvest of Brazil’s robusta crop, which confirmed that drought in January and February had caused significant damage by limitting bean size and overall cherry development in the final phase of flowering, which is known as the bean formation process.

It’s not for nothing that SpillingTheBeans has insisted that the world coffee supply and demand balance is a lot more precarious than what most in the bear-camp of the market has wanted to acknowledge. The evidence of crop impact from erratic weather and climate change has been visible since the onset of flowering for the 2013-14 as well as it was in the last 2012-13 harvest. Interviews with producers on the ground during first hand crop visit by SpillingTheBeans in all these countries have confirmed this predictions for most of the last year.

With 3.8 million bags less in Brazil, here goes the final buffer that was meant to make up for smaller crops elsewhere in the world of coffee ahead of the next harvest cycle and ahead of the main coffee roasting season in the U.S. which starts in September and October. The current market conditions and prices well below the cost of production in producing countries, including Brazil, only brew further trouble and volatility in the months ahead and for those who do not make sure to cover their contracts and physical needs soon, beware it could turn out to be very costly to wait.

Traders and analysts have across the board been cautious in their projections for Central America and to what extend the harvest is expected to suffer because of the rust disaster. This can be justified due to the fact that flowering and final bean formation is still ongoing in many of the producing regions and to date exports have not been reported dramatically down from the 2012-13 harvest. Colombia is at the same time enjoying a modest recovery and can be expected to add about 1 million bags in production during the next years to a total of between 9 and 9.5 million bags. While this will ease some of the losses from Central America, it will still fall short of at least 2.5 million to 3.5 million bags from the Colombian average of annual output between 11.5 and 13 million bags seen up until five years ago.

Based on all these figures, unless a miracle happens – such as perfect weather, but then when did that ever happen? – the world coffee balance is headed for a total of between 142 million and 143 million bags of production in the next 2013-14 crop cycle, while consumption is headed toward between 144 million and 145 million bags. And this might easily be in the best case of scenarios.

Only question remains, what will happen when The Funds decide to cover their net short positions of between 9.2 and 9.5 million bags?

-Editor’s note: At the time of initially writing this piece in July 2013 the funds were still holding net short positions near record highs but as of July this year the funds are net long. The basic fundamentals and multiple problems causing a deficit in the supply chain, howwever, remain unchanged as does the very low stocks in the world market currently available.

Leave a Reply to B Igney Cancel reply

BREAKING: Indonesia April Coffee Exports From Sumatra Plummet Over 79% On Drought
Brazil May Coffee Exports Continue To Erode, Down 17.5% To Fresh 4-Year Lows At 2.17M Bags As Stocks Dry Up, Jan-May Exports Dn 8.9%