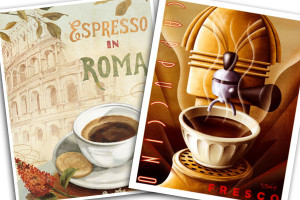 DEC 13 (SpillingTheBeans)–Active March Arabica coffee futures continued to rally on Friday, surging 3.95 cents to settle at fresh 4-month highs of $1.1525 per pound at the ICE futures exchange in New York, and extending gains by 8.85 cents from the week-ago level. Arabica futures have made a strong performance this week but traders said it’s still too early to predict whether this will lead to any significant upward trend in prices, which for most of the time since late August have traded close to 4-year-lows. Both March and more forward May futures opened higher and never ceased territory, instead continuing to extend gains throughout the session before losing a tad 0.25 cent from the session high of $1.1550/lb in the last few minutes before settlement. Traders said the lack of selling out of Vietnam continues to provide the main support to prices and this situation was on Friday further supported by funds going on a buying spree to cover short positions. More forward May Arabica futures closed up 3.85 cents at $1.1745/lb.

***
DEC 12 (SpillingTheBeans)–Active March Arabica coffee futures made another strong performance on Thursday, closing up 1.60 cent at $1.1130 per pound at the ICE futures exchange in New York and extending on gains from earlier this week to settle well above the psychologically important barrier of $1.10/lb. More forward May Arabica futures also settled up 1.60 cents and closed at $1.1360/lb, marking new 4-month highs across the board for the most active contracts at this point. While traders said it was still too early to early to say whether this marks an actual upward shift in prices, the continuing slow exports out of Vietnam “is a fact that is lending support to prices” and which will “likely preserve” until or unless there is a definitive change in the shipment trend of of the world’s 2nd-largest producing country. Local traders in Vietnam say the producers are unlikely to start increasing sales from the new 2013-14 harvest until late January and may even wait until mid-February after the traditional Vietnamese “Tet” new year celebrations have passed.

DEC 11 (SpillingTheBeans)–Active March Arabica coffee futures closed down 0.55 cent at $1.0970 per pound on Wednesday at the ICE futures exchange in New York but hold on to most of the gains of 4.15 cents from the previous session. Traders said prices were receiving support from fund buying in an attempt to cover some of the short positions following multiple reports about significantly lower than expected exports out of Vietnam, the world’s second largest grower after Brazil. Arabica futures opened flat and made an early attempt to build on the gains from Tuesday’s session, rising to $1.1145 before some calculated profit-taking set in and brought prices back down. More forward May Arabica futures settled down 0.50 cents at $1.1200/lb.

DEC 10 (SpillingTheBeans)–Active March Arabica coffee futures closed up a convincing 4.15 cents at $1.1025 per pound on Tuesday at the ICE futures exchange in New York after traders got cold feet over the continuing slow flow out of Vietnam and started a buying spree to cover short positions. Reaching a 4-month high traders said volumes were modest and the strong gains were primarily due to the “Vietnam effect.” Expectations in the bear camp of a record crop out of the world’s second largest producing countries to date has failed to materialize and new crop shipments of 2013-14 coffee to date have not showed any evidence of a record crop. Weighing on the market and supporting the bull-camp — that for months have tried to raise concerns over weather damage in most of the world’s top producers causing a significant cut to supply — are the concerns shared by many traders in the market that even the bear-camp “hold some worries” about going any lower and testing levels below the heavy psychological barrier of $1/lb. They are aware such levels could have precarious and “potentially disastrous” effects on the current market as prices are already trading well below the cost of production in most producing countries. More forward May Arabica futures also settled up 4.10 cents at $1.1250/lb.

DEC 9 (SpillingTheBeans)–Active March Arabica coffee futures closed down 0.30 cent at $1.0610 per pound on Monday at the ICE futures exchange in New York after another event-less day in a slow market dominated by little activity. Traders said the market “desperately needs an indicator that gives it a more clear sense of direction” with overall trade still dominated by the bear-camp that believes supply is plenty-full for now. But, said one trader, the bear-camp is also concerned about going any lower and testing levels below the heavy psychological barrier of $1/lb as they are aware this could have precarious and “potentially disastrous” effects on the current market where prices already are trading well below the cost of production in most producing countries. More forward May Arabica futures also settled down 0.25 cent at $1.0840/lb.