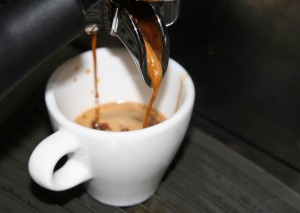 JULY 12–September Arabica coffee prices crashed 4.10 cents on Friday to settle down at $1.1930 per pound at the ICE futures exchange in New York on Friday. The market continues to be in a push-and-pull battle between bears and bulls fighting over the direction, with the bull-side trying to bring the market up to higher levels. The market opened flat and rose to $1.2440/lb before losing ground at which point the bears came in strong and continued to lead the downward movement the rest of the session.

***
JULY 11–September Arabica coffee prices rose 1.75 cents at the ICE futures exchange in New York on Thursday and setttled up at $1.2340 per pound after another session with bulls and bears battling out the direction of the market. But after two days in the hands of the bears, the bulls on Thursday succeeded in bringing the market back to higher levels. The market opened up 0.65 cent and the bull-move managed to take it to a recent high of $1.2445/kb before losing some terrain. Prices, however, closed comfortably higher and the bull segment of the market now has the opportunity to try to establish a range above the recent 4-year-lows.

JULY 9–SpillingTheBeans Market Insight: September Arabica coffee prices at the ICE futures exchange in new York on Tuesday setttled down 1.20 cents at $1.2225 per pound after another lackluster session with bears pushing against an attempt to bring the market back up, traders said. A lot of operations continued to be more of “technical characteristic” as traders were moving positions forward ahead of the expiration of the July arabica contract. Prices had been up in over-night trade but then opened down 0.55 cent in New York and continued to fall, crashing 3.45 c/lb before recovering some ground in late session.