Mexico City was hit by a SECOND massive 7.1-magnitude quake on Tuesday and at least 47 people have been reported dead in the neighboring states of Puebla and Morelos. Terrifying search and rescue scenes are currently unfolding in my Condesa neighborhood with entire buildings and houses collapsed. The death toll will rise for sure. 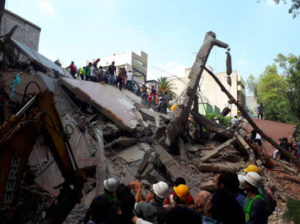 Dear Followers and Coffee Lovers. Coffee communities across Oaxaca and Chiapas in south-western Mexico are bearing the BRUNT of the deadly and devastating impact caused by the Monster Quake that struck late Sep 7, as the entire eastern coffee belt centered around Veracruz and Puebla had to prepare for the landfall of deadly Hurricane Katia. As we are writing these lines a new Tropical Storm Max is gathering strength and could become a Hurricane before making landfall on Sep 14th just NORTH of the areas already devastated by the Quake in Oaxaca and Chiapas, threatening the already hardest hit areas with life-threatening landslides.

The situation RIGHT NOW is particularly precarious given that soils already are SATURATED with water from much more fierce hurricane and storm activity this year. Data from weather stations in the Sierra Madre coffee belt released earlier today show that rainfall by Sep 11 was up a stunning 55 percent at 3570mm compared to 2297mm at this date a year ago.

The current situation of natural disasters is unprecedented and SpillingTheBeans appeal to all coffee lovers and coffee industry stakeholders to help with support toward Mexico in this extraordinary time of need. Mexico is always among the FIRST to come to the rescue and send support and aid to victims of natural disasters around the world because Mexicans KNOW BETTER than most what it means to be at the eye of the storm and in the path of destruction and disaster — this time it’s Mexico that needs your help! Please browse to the end of the story for links for where to donate.

SEP 12–The death toll from the quake has risen to 96 plus two dead from Hurricane Katia in Veracruz.
SEP 11–We are devastated to confirm that the majority of the victims who died in the quake in Oaxaca were ALL from the coffee producing community of Juchitan, the small town at the center of devastation and destruction by the massive quake is home to several coffee cooperatives growing organic coffee certified by OICA/OCIA and known for their brand Zapoteca coffee in the local market.
–At the same time, even though Hurricane Katia has dissipated, no less than THREE new storm systems are currently forming with two along Mexico’s Pacific coast and one in the Atlantic.
SEP 10–The death toll had by Sunday risen to 90 from the quake in Chiapas and Oaxaca, plus 2 who died in Veracruz from mudslides caused by the torrential rains that followed in the wake of Hurricane Katia making landfall.

SEP 8, 11:55pmEDT–Hurricane Katia has made landfall at Mexico’s Veracruz coast as a Category 1 hurricane.

–(C) Photo by Luis Alberto Cruz for The Associated Press

SEP 7-8, 2017 (SpilingTheBeans)–A massive 8.4-magnitude quake struck Mexico just before midnight late Thursday, leaving at least 61 people confirmed dead by Friday evening and thousands homeless in what was one of the strongest earthquakes ever recorded in Mexican history, civil protection agency officials said. President Enrique Peña Nieto visited some of the worst hit regions in the states of Oaxaca and Chiapas and declared 3 days of national moaning for the victims.

In an unprecedented situation, as key coffee regions and communities across Chiapas and Oaxaca were struggling to deal with the aftermath of the Quake, Mexicans in Veracruz state on the Gulf of Mexico braced for Hurricane Katia which was expected to make landfall as a Major Hurricane during the night from Friday to Saturday. Mexican coffee regions across the Nr 2 and 3 coffee states of Veracruz and Puebla, as well as parts of Hidalgo, San Luis Potosi and Queretaro, were preparing for very heavy rainfall and life-threatening flash floods in the wake of Katia’s land fall.

Over 95 percent of Mexico’s coffee growing area are currently exposed to the effects of not only the Quake but also the multiples hurricanes that have passed through Mexican waters since early August. This comes at a time when picking of the new 2017-18 coffee crop is just weeks from starting, making ripe cherries particularly vulnerable to excessive rains which often causes cherries to fall to the ground, at which point that coffee rarely can be recovered for human consumption. The massive excess water and humidity has also given new rise to the coffee rust pest, growers in Chiapas told SpillingTheBeans. 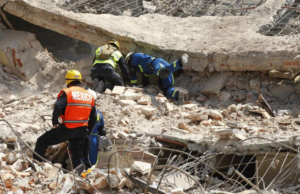 The rains from Katia now comes after weeks of SEVERE rains across Mexico from Hurricane Harvey’s destructive passage toward Houston, which happened at the same time as two other storms and storm systems provoked rains on the Atlantic side of Mexico in addition to Hurricane Lidia on the Pacific coast. The rains which continue to hammer Mexico are further strengthened by the unprecedented condition of three major hurricanes all moving through the Caribbean and Gulf of Mexico at the moment, which in addition to Katia includes Hurricane Irma continuing at FIERCE strength toward Florida and Hurricane Jose upgraded to a furious Category 4 Hurricane.

*If you are IN Mexico, you can hand over donations of clothing, food and other essentials at; http://www.animalpolitico.com/2017/09/centro-acopio-sismo-daminificados/

SpillingTheBeans is currently talking to a number of roasters in Europe, the U.S. and elsewhere to set up special funds for the Mexico quake and hurricane victims. As soon as we get more links we will update the story here and publish them. Please stay tuned for more information. 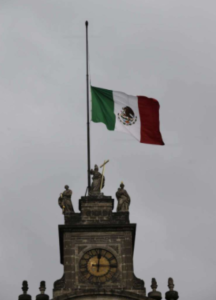 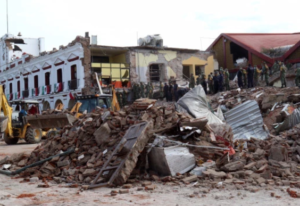 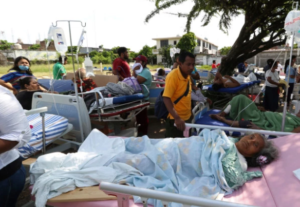 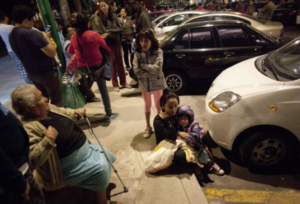 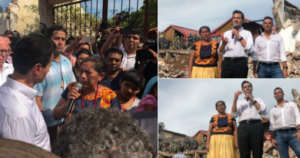 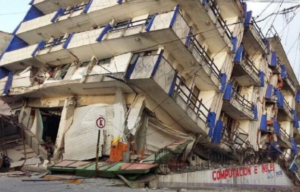 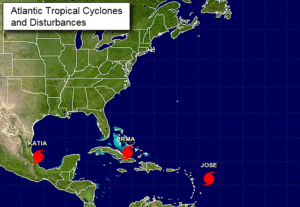