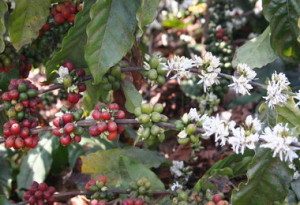 SEP 8, 2014 (GCR Magazine)–A team of researchers have sequenced the DNA of the Robusta coffee bean in an effort to improve the bean’s yield, quality and resistance to disease and drought, Nestlé has reported.

The company said that by looking at the relationship between the genome structure of Robusta and other species like tea and cocoa, researchers were able to learn about coffee’s independent pathway in evolution.

According to Nestlé, the researchers have found that the sequences and positions of the genes in Robusta evolved independently from genes with similar functions in tea and cocoa, which also make caffeine.

The French Institute of Research for Development, the French National Sequencing Centre and the University of Buffalo, lead the study. Nestlé said its scientists contributed through the Nestlé Research and Development Centre in Tours, France.

Coffee and Science; It’s Hot, It’s Exciting And It’s All About Great Coffee!
MARKET TAKE: Where Are Coffee Prices Headed?