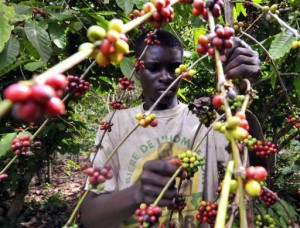 DEC 13, 2013 (GCR Magazine)–Cote d’IvoireNestlé has opened a new experimental farm on a 30-hectare site in Côte d’Ivoire to focus on plant science and research into nutrition, sustainable agriculture and rural development.

The farm, located at Zambakro, some 18 kilometres from the capital, Yamoussoukro, will create 20 jobs by 2014.
The ceremony was attended by Côte d’Ivoire’s Prime Minister Daniel Kablan Duncan.

The centre will feature a mini propagation laboratory, where high-yielding plantlets for distribution to cocoa and coffee farmers will be grown. It will also host a breeding programme for new varieties of coffee and a soil fertility lab.

The opening of the farm, which also features demonstration plots for practical training, was welcomed by the Côte d’Ivoire’s Minister of Agriculture, Sangafowa Coulibaly, who said it would help boost agricultural productivity and competitiveness.

“It will be a platform for training and learning which will help develop a new generation of farmers, giving them the technical skills and a readiness to take on and succeed with new agricultural projects,” he said in a statement.
The farm aims to provide an estimated 27 million coffee plants and 12 million cocoa plants by 2020 to rejuvenate plantations in the Ivory Coast, improving both yields and livelihoods for farmers.

The farm will also provide training in the latest agricultural techniques to Ivorian farmers, co-operatives and other partners.

War torn: The fate of Ivory Coast’s coffee industry
(From the May 2012 issue)

The fate of Ivory Coast’s coffee industry continues to hinge on the outcomes of ongoing political turmoil.

Ivory Coast coffee farmerThe docks of Abidjan, for so long the main economic causeway of Ivory Coast’s business capital, have been dormant. Like the airport and the roads north out of the lagoon city, the only traffic at the port has been military—United Nations convoys or French peacekeepers who have tried to preserve the vital trade infrastructure from the destructive conflict outside.

Inside Abidjan’s warehouses, hundreds of thousands of tons of agricultural commodities have been waiting for the crisis to pass and normal commercial life to resume. As the world’s leading cocoa producer, most international attention has focused on the condition of that crop. But, alongside it lies the fate of Ivory Coast’s coffee industry – in a decline for so long, but that could now steepen or, some hope, be reversed depending on what happens next.