ORIGIN UPDATE: Zimbabwe’s Coffee Industry Struggles to Recover But Gets Some Help 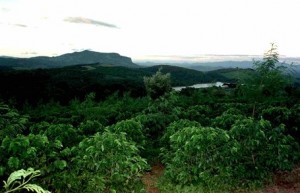 JULY 26 (SpillingTheBeans)–Zimbabwe used to be known for its so-called “super coffee” Arabica beans, a variety based on some of the original seeds planted in Kenya which produces a fantastic cup quality. Years of President Mugabe’s race-motivated land reform, however, has left the Zimbabwean coffee industry in ruins and coffee lovers who have had the privilege of trying some of the beans from these beans have forever since bemoaned the fact that there is so little left of this coffee today.

SpillingTheBeans visited Zimbabwe at the height of Mugabe’s land invasions in the spring of 2004 and witnessed first hand a land of former glory thrown into chaos, mayhem and ultimate disaster under a brutal regime of terror and fear. The experience was outright terrifying these days, and part of that story, and the truly heroic efforts of the coffee farmers surviving throughout this sad time of the country’s history, will be told in the book in the works under the same title and mentioned elsewhere on this blog.

The picture here is from one of the only coffee regions still left in operation in the Chimanimani region in central Zimbabwe, where a handful of farms are struggling to stay in business. Total coffee production from Zimbabwe has in recent years hit new lows at levels between 15,000 and 20,000 (60-kilograms) bags. This compares to the peak of production of over 250,000 bags in the early 1990s, according to statistics from the International Coffee Organization.

Despite that political instability remains high in Zimbabwe today, SpillingThebeans has received multiple reports from coffee farmers in the Southern African which all agree that the situation today is improving from the conditions seen in 2004 and 2005. And while the farmers are struggling to recover their industry, it is welcome news that some segments of the coffee industry in Zimbabwe is getting a helping hand from partners in the U.S. and some of the Super Coffee is starting to find its way to the export market again.

We want to share the following story and encourage coffee lovers to support such projects and buy Zimbabwean coffee wherever available in order to support the efforts of the growers back in Zimbabwe.

KANSAS CITY, Mo. — After speaking with Bo Nelson about his new coffee startup, Thou Mayest, one may feel as if they could conquer the world. That’s because Nelson’s passion for coffee – and the people he’s hoping to help – punctuates every sentence. Quite literally, Nelson is a man on a mission.

That mission began seven months ago after he returned from Zimbabwe, East Africa. Its economy crashed in 2000 and it’s just now making a slow comeback with the farming of wheat, tobacco and coffee.

While in Zimbabwe visiting a friend he has known since second grade, Nelson was blindsided by the injustice of poverty.

“I can’t unsee these faces,” he said. “I can’t unhear these stories.”

They are stories that broke his heart. But Nelson not only heard of their plight, he saw first-hand the extent of oppression people endure in Zimbabwe — people like coffee farmers.

“Seeing these farms, I didn’t know what to do with myself,” he said.

Growing up in Kansas where his family owns and operates Family Tree Nursery, Nelson knew a little about horticulture. And a little about fair business. And he knew for certain farmers in Zimbabwe were being mistreated. So he set out to do something. That something turned out to be Thou Mayest coffee, which launched in January of 2013 with business partner Bill Holzhueter. They had been roasting coffee as a hobby for two years. The timing seemed right to turn their labor of love into a pursuit of profit – not just for them, but for the meagerly-paid farmers in some of the world’s poorest countries.

Thou Mayest CoffeeNelson wants to change that by providing a delicious-tasting pour-over coffee from beans grown in Guatemala and Zimbabwe – and eventually elsewhere. For Nelson, his endeavor reaches far beyond the rich taste of exotic coffee. It’s about people.

“This is more than coffee,” he said. “Coffee is just a conduit. Coffee provides the opportunity for conversations.”

For the full article, do check out: