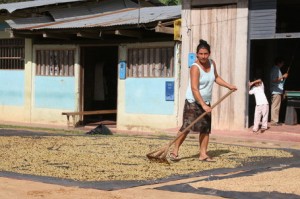 JULY 16 (SpillingTheBeans)–The outbreak of coffee rust in Latin America continues to worsen and up to 25 percent of the entire coffee area in South American producer Peru is now reported to be hit, according to Peru’s National Coffee Council, also known as La Junta. It said some 10,000 Peruvian coffee growers have lost their entire crop because of the extensive damage caused by rust and the producer-group has now called on the government of Peru to increase funds to an emergency coffee renovation and replanting program. The Peruvian government has said aside $35 million dollars in emergency funds for pesticides to try to curb the spread of the outbreak through fumigation.

“The outbreak of rust leaf rust is threatening losses of 1.53 million 60-kilogram bags of coffee, or the equivalent of 25 percent of what out harvest by now should have yielded,” Junta President Anner Roman Neira told local press in Peru. He said in the worst affected regions as much as 70% of the entire coffee area has been infested by the rust fungus.

SpillingTheBeans has visited Peru several times in the last few years and firmly believes that if Peru’s boom in coffee from both renovation and new plantings had not been affected by the onset of rust, the 2013-14 crop would have had the potential to reach close to 6 million bags thanks to many new plantings that were just starting to come into prouction in the last year. 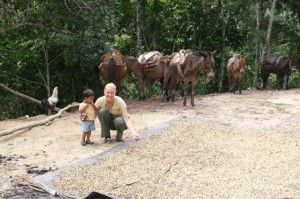 Industry officials in Peru as well as independent analysts confirm that the Peruvian coffee sector has in deed been hard hit by rust.

“When you travel across the northern producing regions in Peru, it’s a complete disaster, the rust is everywhere, even in all the new trees that were just planted in the last 5-7 years, and the only trees which are not hit are varieties based on Catimor,” said Manuel Diaz, an independent coffee consultant who just got back from a crop visit to Peru two weeks ago. The Catimor variety is a hybrid with a small percentage of robusta coffee in the genetic mix, which makes it more resistant to crop pests such as rust than more traditional varieties like Typica and Caturra.

The forecast for Peru’s coffee production to fall for the second consecutive year is supported by the U.S. Department for Agriculture, which in its first world forecast for the new 2013-14 crop cycle – which in most growing countries officially starts in October – said total Peruvian coffee output is projected to fall to 4.1 million bags. This compares to 4.3 million bags in the last 2012-13 cycle, which has now been completed in Peru, and to 5.1 million bags in the 2011-12 year. Many other analysts pegged the record 2011-12 harvest in Peru to have reached as much as between 5.4 million and 5.5 million bags.