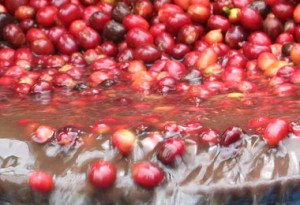 JAN 16 (SpillingTheBeans)–Cash differentials paid for arabica coffee in Central America and other Latin American Arabica origins continued to strengthen this week even as New York futures prices hold on to 10 percent gains form the first two weeks of the year, traders and exporters.

Differentials for Arabica coffee from Central America, which supplies about half of the top-quality Arabica beans produced in Latin America, have remained firm during the last five months and registered little notable changes even as futures prices have been trading around 4-year lows. Latin America, meanwhile, is home to about 75 percent of the world’s mild washed Arabica coffee exports.

“The fact that differentials not only stay this firm, but even strengthen against a rise of 10 cents in the market, is a clear reminder that we have a supply problem looming high over the market,” one physicals trader in the New York market told SpillingTheBeans.

“All the latest forecasts all pointing to lower than expected crops in Brazil have people in the market, and especially roasters, worried. Even if there may be enough supply to cover demand, competition over the best Arabica beans for the specialty market will be under a lot of pressure,” said another green coffee trader.

Traders agree that even though the market outlook for 2014 point to a deficit in the supply-demand balance, stocks from the last two large world crops will make overall supply available sufficient to meet supply. But this does not, however, mean the supply is “sufficiently evenly available” to meet demand of the top quality Arabica beans needed by the rapidly expanding specialty market, which rely heavily on the type of beans and flavor profiles produced in Central America.

“This is a reminder to roasters that not all Arabica beans can be replaced that easily,” said one exporter in Central America.

Premiums for top grade SHB coffee from Guatemala, one of the countries most severely hit by the worst outbreak in history of the leaf rust crop pest, were quoted at between 22 and 23 cents per pound this week, compared to premiums of 20-21 c/lb at the beginning of the years.

Exporters in El Salvador, where like in Guatemala between 50 and 70 percent of the entire coffee area was hit by varying degrees of rust in the last cycle and where growers are still only recovering slowly, reported Strictly High Grown beans offered at premiums between 12 and 13 c/lb, compared to premiums between 10 and 11 c/lb two weeks ago.

Colombia, where evidence has now firmly emerged of a real recovery in production for the first time in five years with output in the 2014 calendar year is expected to get back to around 11 million bags, also saw premiums rise between 1 and 2 c/lb this week since the start of trading in 2014.

The following table shows the differentials for the main arabica coffee grades from Latin American origins this week as quoted in cents per pound against the March “C” contract at the ICE exchange in New York. Quotes are all for 2013-14 crop, free on board for Feb-Mar delivery.

–By Maja Wallengren, a Blog Exclusive for SpillingTheBeans