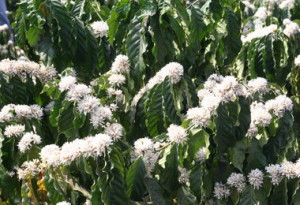 FEB 4, 2014 (Bloomberg)–Robusta coffee rose to the highest in more than five months in London amid lack of selling during a holiday in Vietnam and after the arabica variety in New York surged the most since 2004. Sugar was little changed.

Vietnam, the top producer of the robusta variety used in instant coffee, is currently celebrating Tet, the festival that marks the Lunar New Year, reducing selling pressure on prices. Arabica coffee, favored for specialty drinks such as those made by Starbucks Corp., jumped 8.6 percent in New York yesterday, the biggest gain since November 2004. Dry, hot weather in Brazil, the biggest arabica grower, threatens to cut output.

“The Tet holiday in Vietnam has probably kept much pent-up selling out of the market, but this is sure to find its way in soon,” ABN Amro Clearing Bank NV said in a report e-mailed today. Arabica gained “additional support from the underlying fundamental story of the hot, dry weather in Brazil.”

In New York, arabica coffee for delivery in March rose 1.1 percent to $1.374 a pound on ICE Futures U.S. The price touched $1.379 a pound, the highest for a most-active contract since May 17. Futures trading volumes were about four times the average for this time of day, data compiled by Bloomberg show.

Coffee surged 24 percent this year in New York, making it the best performing commodity in the Standard & Poor’s GSCI gauge of 24 raw materials. Brazil had the hottest January ever recorded and the least rain for the period in 20 years, according to Marco Antonio dos Santos, an agronomist at Sao Paulo-based Somar Meteorologia. Dry weather will persist through Feb. 20 in the southeast, the main growing region, Celso Oliveira, a meteorologist at Somar, said yesterday.

“In the current mood, few would sell short right now,” ABN Amro said, commenting on arabica. “Origin did sell into the rally but were just blown away by the aggressive buying.”