In honor of my visit later this month to Ethiopia, the birthplace of Coffea Arabica, I am republishing a number of my special reports on this awesome country and its wonderful countries. Amesege’nallo Ethiopia for bringing coffee to the world!

In the world of coffee it’s impossible to bypass the importance of Ethiopia. Long revered as the
birthplace of Coffea Arabica, it is thanks to Ethiopia that coffee was brought to the world. It was because Ethiopians after the initial discovery at some point decided that they like coffee as a beverage, that coffee cultivation was initiated on a commercial basis in the first place. And Ethiopians have always liked their coffee, so much that for years up to 60 percent of the country’s production would never leave the East African country, but end up being gulped down at home. As the economy is improving, Ethiopian consumption continues to expand in parallel with better spending power. In Part 2 for the Tea & Coffee Trade Journal’s special series on Ethiopia SpillingTheBeans’ Author Maja Wallengren takes a look at what really drives coffee consumption in Ethiopia, the culture, the unique history and what lies ahead for the future. 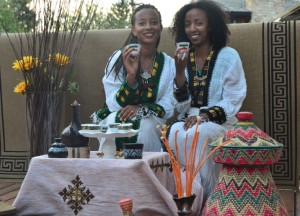 It’s green, it’s a circle and it has got coffee in the name. But contrary to popular belief the logo in question is not that of the Seattle-based cafe trend setter Starbucks Coffee Co, but one of much more humble origins. Just like the humble origins of Arabica coffee, Kaldi’s Coffee house has been quick to seize on the economic improvement seen in Ethiopia in the last five years. And in the bustling streets of Ethiopia’s capital Addis Ababa, the green circle logo is found everywhere as Ethiopians from all walks of life openly are embracing modern coffee shop culture.

“This is one of the best coffee shops in Addis today so it’s always full,” said Musie Tesfaye, an office worker enjoying a coffee together with two friends on a late Thursday afternoon in the financial district of the capital. Tesfaye has, like most Ethiopians, been drinking coffee since he was a young boy. Despite the Western influence by the use of Italian-based espresso machines in Kaldi’s Coffee house, he likes the coffee.

“I first had coffee when I was about eight years old and I have been drinking coffee every day since I was 14 years old. I like the strong coffee and the way they make it here resembles that pure coffee flavor that you get with the traditional Buna in Ethiopia,” he said, referring to the traditional word for coffee in Amharic, the official language spoken in Ethiopia. 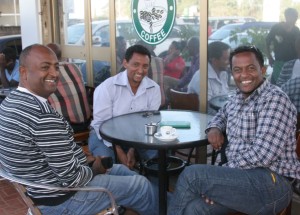 The coffee at Kaldi’s Coffee House, an espresso blend from the southern Kaffa region, is delicious; Bold with a powerful body, yet balanced acidity and a silky smooth flavor. According to legend, it was a goat herd named Kaldi who discovered coffee upon observing how his goats became unusually bouncy after eating the red cherries of the green bushes in a forests area of Kaffa sometime around the 6th Century. Ethiopians are proud of their legend about Kaldi’s dancing goats and Kaldi is a name frequently used in the coffee business.

The first Kaldi’s Coffee shop was opened in 2006 and has already expanded to over 20 branches across the capital as well as to a number of major provincial cities. While Ethiopians have been quick to embrace the modern concept of coffee culture, there is no denying, however, that traditional Buna is still by far the preferred choice of coffee for the average Ethiopians. Outside the capital, coffee can be bought as cheap as 10 cents per cup in traditional village settings in rural Ethiopia. But the preparation couldn’t be further apart from the modern concept. Prepared in what is officially acknowledged as the “Ethiopian Coffee Ceremony” it is a craft only mastered by women, who dressed in traditional embroidered white clothing will take up to an hour to prepare and brew the coffee. 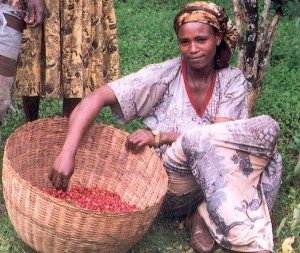 Like in a scene from a movie played in slow-motion, a batch of raw green coffee beans are gently roasted on a flat iron-pan over a low charcoal fire in a process lasting 15 to 20 minutes. As the air starts to fill with the smell of roasted coffee, the woman in charge of the ceremony elegantly starts grounding the beans in a small wooden mortar before carefully scoping all the ground coffee into the traditional black clay coffee pot. The pot, or Jebena as the Ethiopians say, is then placed directly in the coal and put to brew while all along incense is burned and people sit around the scene on small stools enjoying the whole event. 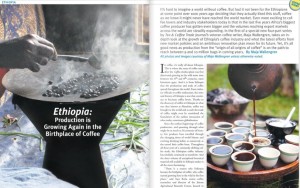 “Since coffee was first discovered it’s been a cultural practice in Ethiopia to use coffee as a daily drink where the family gets together and you see this practiced as a custom for almost all the over 80 tribes in the country,” said Jemal Ahmed, Chief Executive of the Horizon Plantations coffee estate group, the largest in Ethiopia with six private farms spread out through the country’s growing regions.

“The unique ceremony of brewing the coffee has also become a tradition for people in order to enjoy the process of roasting and brewing it by the very people who consume it, which makes it the sole beverage used to bring together family including the wives and children, neighbors or visitors,” Ahmed tells the Tea & Coffee Trade Journal in an exclusive interview during a visit to Ethiopia, 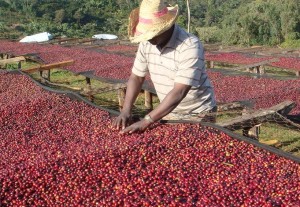 From the busy daily life in the capital to the remote southern Kaffa, coffee will follow visitors at every mile of the trip, every part of the visit. Driving along the East African Great Rift Valley – which starting in northern Ethiopia cuts right through Kenya, Uganda and Tanzania – coffee is found across the road: From street vendors to small coffee shops assembled in a typical straw huts, to coffee ceremonies performed in elaborate settings in stylishly decorated restaurants to simple settings directly on the ground. Here, in the heart of the Kaffa coffee lands, coffee is still found growing in the wild up to 15 meters tall and boys as young as 8 are still found herding cows and goats.

“I like coffee, especially in the morning when it’s cold, it’s really nice to get the hot coffee,” said 11-year-old Matius Baro, who herds cows rather than goats but otherwise resembles what any coffee fanatic happily would accept as the perfect modern replica of Kaldi. 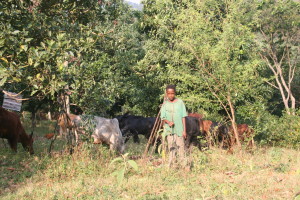 Through most of the 1990s Ethiopia’s annual coffee production would average between 3 and 3.5 million 60-kilogram bags and at least 1.7 million bags would be used for local consumption in any given year, according to figures by the London-based International Coffee Organization.

At the beginning of the Millennium production slowly started to expand, in part because of market reforms that started opening up for private investment and in part because of official government policies – supported by foreign aid – which provided financial assistance toward the renovation of old farms. By the 2004-05 harvest Ethiopian production surpassed 5 million bags for the first time and since then output has gradually expanded to between 7 and 7.5 million bags, according to private industry estimates. But for those optimistic souls hoping that all this additional supply will become available for the export market, disappointment is quick to emerge because the local consumption has kept in pace with the growth in output.

“The number one reason behind the surge in consumption is due to the growth in population, while in the rural area coffee has always been a source for social gathering. An Ethiopian house wife will always explain any additional revenue as ‘now I got my coffee money’ and this has always been the case, only that now the household income has increased,” said Horizon’s Ahmed. 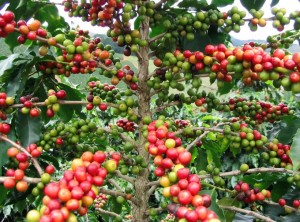 Ethiopia’s per capita GDP had by 2013 climbed to $498, according to the World Bank, and while this to many people may not sound impressive, it is in fact over four times more what it was in 2000 when per capita GDP was registered at only $122. The overall Gross Domestic Product, meanwhile, grew to $47 billion in 2013 from just $8.1 billion in 2000, while Ethiopia’s population today is estimated at over 95 million people compared to 66 million people in 2000, according to World Bank figures.

Low per capita coffee consumption in producing countries have for years been a source of debate in the market. All the way up until the boom in coffee culture in earnest started to consolidate in the last five years, the key question has been why countries known to produce top quality beans would not have higher consumption in their home markets. The history behind the evolution of coffee consumption, however, was never eyed for the producing countries themselves. Developing countries all started growing coffee because colonial powers wanted coffee for the export market, hence the local population in producing countries across the world were never encouraged to even try the product. The only exemption to this was Ethiopia where people started growing coffee because they actually liked the brew that emerged from the little beans. 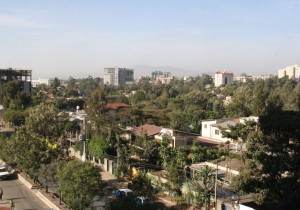 Back in Addis Ababa, coffee culture is growing fast. For a country that just five years ago was still rated one of the world’s poorest, the visible improvement of real social development and economic progress is a welcome signs of development starting to take hold in Ethiopia.

While the growth in global coffee consumption for most of the last decade has been dominated by emerging markets, increasingly, the strongest force driving the world’s thirst for coffee has come from the very coffee producing countries themselves including not only Ethiopia but also coffee nations such as Mexico, Indonesia, Brazil and Vietnam which in the last 10 years have seen annual growth of between 3 and 7 percent. This trend is expected to continue, analysts agree, and that means that for all the excitement about the growth in export figures from Ethiopia in recent years, consumers in the U.S. and Europe are going to meet increased competition for that new production from the domestic market in the birthplace of Arabica coffee itself. Coffee demand is not only expected to continue to grow, but in many ways coffee really is the essence of Ethiopian culture and the soul of the people.

“There is no doubt that coffee consumption will continue to expand in Ethiopia, because it’s the most important commodity to Ethiopian consumer,” said Ahmed, adding: “To Ethiopians, drinking coffee means time to chat, to gossip, sometimes used in connection with either praying or mourning, and other times used at weddings as part of the celebrations. Coffee, really, means everything in Ethiopian culture.”

To read the full article and the rest of the Special Series on coffee in Ethiopia for FREE please go to; http://viewer.zmags.com/publication/b1ad96ea#/b1ad96ea/36

Maja Wallengren has been writing about coffee for more than 20 years from over 45 coffee producing countries across South-East Asia, East and West Africa and across Latin America. She can be reached at
http://spilling-the-beans.net/contact
-0-