Three years with varying degrees of drought has left Brazil’s coffee producers with more struggles than growers here are used to deal with. From the early forecasts of a slightly bigger to a much better crop in the last 2015-16 Brazilian harvest — from which exports are now being shipped and will continue until the new harvest starts reaching the market in late June — the latest figures show just how difficult it has become for a crop to reach early projections as drought and related effects of climate change are taking a heavy toll. SpillingTheBeans toured Brazilian coffee regions that account for 65 percent of the total crop in late July last year and predicted it would be a miracle if the last harvest would yield more than 44 million to 45 million 60-kilogram bags. As now confirmed by Conab, the official crop forecasting agency, the harvest ended at 43.235 million bags and as one of the smallest on record for the last 10 years. This in turn, created a NEW DEFICIT in the market of between 10 and 12 million bags for the shortfall in Brazil’s output to cover export demand of 34 million bags and domestic consumption of 21 million bags. In this special report written for the November edition of GCR Magazine’s we asked just what will a new Brazil deficit mean for the market as local stocks are nearly depleted? 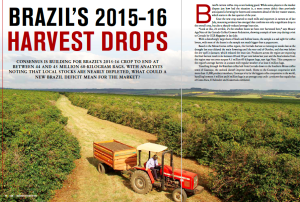 NOV. 2015 (GCR Magazine)–The new Brazil coffee crop is in trouble. Even though the market continues to try to dismiss just how bad the situation is, an even more severe deficit than previously anticipated is brewing for buyers and consumers ahead of the key roaster season which starts in the last quarter of the year. And since the new crop started to reach mills and exporters in earnest as of late July, mounting evidence has emerged which confirms not only a significant drop in the overall crop but also a sharply reduced average bean size.

“Look at this, it’s terrible, it’s the smallest beans we have ever harvested here,” said Moacir Aga Neto of the Cerrado Coffee Growers Federation, showing a sample of new crop during a visit to Cerrado by GCR Magazine in late July. With a disturbing share of black and hollow beans, the sample is a sad sight to coffee lowers with most of the beans in the sample not much bigger than a peppercorn.

Based in the Minas Gerais coffee region of Cerrado, the Cerrado harvest is running 6 weeks late as the drought last year delayed the main flowering until the very end of October, and that was before the dryspell in January which reduced the bean size. Producers across the region are expecting the final harvest result to be between 20 and 30 percent below last year and the final volume from the region may not even surpass 4.5 million 60-kilogram bags, said Aga Neto. This compares to a harvest in a season with regular weather of at least 6 million bags.

Traveling through the Brazilian coffee belt from Cerrado down to the Southern Minas coffee town of Guaxupe, the outlook doesn’t improve much. Home to the Cooxupe cooperative with over 11,000 producer members Cooxupe is by far the biggest coffee cooperative in the world, handling between 5 million and 6 million bags in an average crop cycle –a volume that equals that of Costa Rica, El Salvador and Guatemala combined. 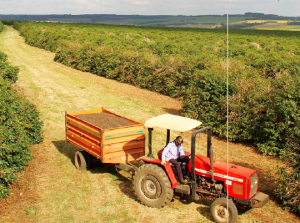 “It’s still too early to make a final evaluation, but the harvest is delayed and there is no doubt that the drought has had an impact,” said Carlos Paulino da Costa, president of the Cooxupe cooperative. Figures from Cooxupe shows the total harvest in the regions of Cerrado, Southern Minas and Sao Paulo state was 42 percent completed by July 25th while in previous years at this date the harvest was between 51 and 65 percent completed. The harvest delay is significant, as the late maturation of cherries always cause logistical head aches to producers. To make matters worse, this year the delay of picking was followed by the onset of unseasonal rains in late June.

“I was so relieved that I had managed to make it through the delay to the flowering, through the dry spell in January and still managed to produce a decent harvest. Then on June 30th it started raining and for the next 10 days it remained rainy or overcast,” said Valter Lima de Melo Junior, a small grower with 20 hectares who GCR Magazine meets at Cooxupe. “The rains came just after I had finished harvesting and had all my coffee drying on patios, and as a result most of the coffee got fermented. Now I have to sell almost all of it at a heavy discount,” said Lima de Melo.

The latest series of trouble in Brazil all started over three crop years ago with the drought in Espirito Santo in the first quarter of 2013 that led to a drop of some 5 million 60-kilogram bags alone from that state in Brazil’s 2013-14 harvest. With average annual production at between 15 and 16 million bags, Espirito Santo is Brazil’s second largest coffee growing state.

If weather had been kind to Espirito Santo this year the 2015-16 cycle could have been the year – as the 3rd crop after a severe drought – where plants and soils would have been able to pose a recovery. Instead, between the start of flowering in Espirito Santo last September and through February, when the young coffee cherry go through the crucial period of bean formation, the state recorded over 100 days without any rains, according to Conab, Brazil’s official agency in charge of crop estimates for the Agriculture Ministry. Conab has pegged the 2015-16 harvest to yield 44.25 million bags. Although Brazil crop figures always come in a wide range – from as low as 40 million bags from the most pessimistic growers associations to as high as 51 million bags according to the most optimistic traders – consensus is building around the new crop to end about the same as the last 2014-15 harvest, which according to Conab ended at 45.34 million bags. 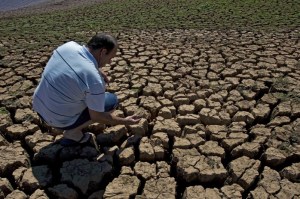 The great Brazil drought in 2014, the worst for coffee in over 70 years

The impact of the delay to the current harvest, as well as unseasonal rains in late June, should not be underestimated, says Carlos Brando of coffee consultancy P&A International Marketing. An internationally acclaimed coffee expert, Brando was for over two decades the head of Brazilian machinery and coffee processing equipment maker Pinhalense which with a presence in over 90 countries also enjoys privileged access to harvest information in producing areas across Brazil.

“The impact of rainy and overcast weather at this stage of production is primarily on the quality of coffee harvested under these conditions and the inability to pre-dry or fully dry coffee is perhaps the worst quality impact of adverse weather that coffee can suffer during the harvesting season. Delays in harvesting cause cherries to ripen beyond the ideal time to be pulped and expose cherries to the risk of dropping to the ground when they dry on the tree if not from wind and heavy rains,” said Brando. 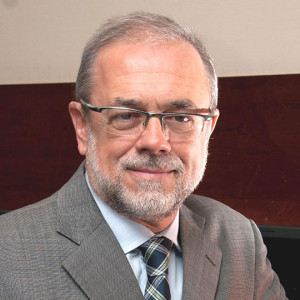 Driving through Minas Gerais–which as a single state accounts for up to 60 percent of the entire national ourput from Brazil–onward to the State of Sao Paulo for hundreds of kilometers coffee farms cover the entire landscape. But considering the stress to the crop from three consecutive crops hurt by severe drought, trees are looking surprisingly green and healthy. This is where it gets interesting, especially when visiting bigger farms such as the O’Coffee Brazilian Estates which is based just outside the town of Pedregulho in Sao Paulo State.

Sao Paulo is on par with the majority of growing regions in Brazil recording a sharply reduced bean size and the average outlook for the state is for production to drop 20 percent below the forecast, but the harvest at O’Coffee’s 1000 hectares of coffee is ending flat year-on-year at around 32,000 bags.

“Our harvest this year has been pretty good and we expect our final number to reach about the same as last year,” said Edgard Bressani, who took over as the Chief Executive Officer at O’Coffee in 2011. “When I started here production was less than half of what it is today. Since then we implemented a precision agriculture project for which we take 1000 soil samples from all the six farms in the estate and use the highest available technology like GPS coordinates with a tractor sensing application to avoid any waste in our operation,” Bressani told GCR during a visit here. 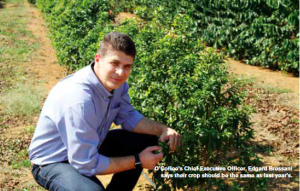 From application down to perfection of crop inputs such as fertilizer to selective irrigation, the entire production at O’Coffee has been turned around to a state-of-the-art agricultural operation where even the worst effects of the drought this year has been controlled through the use of drip irrigation.

“We give each plot of the farm the exact amount of inputs and water it needs and with this system we have increased productivity to 30,000 bags from 15-20,000 bags, and with less input,” he said.

With 20 different “flavor development plots” the O’Coffee estates has also embarked on a new path for the ultimate coffee lovers in the market, offering everything from both yellow and red Arabica varieties, natural and pulped naturals, semi and fully washed beans. 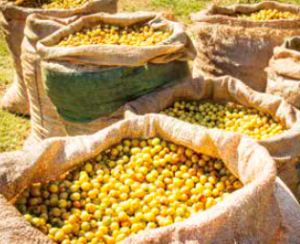 Back to the Sao Paulo coffee town of Espirito Santo do Pinhal, where Carlos Brando runs his consultancy company P&A International Marketing, Brando says it’s these kind of inventions that make Brazilian growers maintain their lead in efficient quality production in the world of coffee

“We know that if you have a well nourished tree that is well maintained, and when you have the technology and level of technification as we have in Brazil, that can soften a lot of the impact that come from adverse weather. Many of the kind of quality impacts that are likely to result from delays in harvesting, processing and drying, can often be minimized with modern technology,” he said.

But even as more and more growers in Brazil are moving toward the level of technification seen at estates such as O’Coffee, there is little doubt that the new harvest will leave Brazil with a new deficit. With an established export demand of at least 30 million bags and local consumption of about 21 million bags, analysts base their world supply-demand balance forecasts on the need a minimum harvest of 50 million bags from Brazil. The 2015-16 crop is expected to fall short by at least 5 or 6 million bags, and as the second small crop in a row, most of the existing stocks available a year ago have been used to supply the similar deficit recorded last year, data shows. 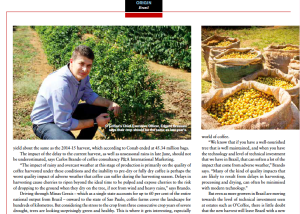 Brazil’s coffee industry recorded a “stock disappearance” of at least 9 million bags in the 2014-15 crop cycle which in Brazil ended on June 30th, according to Marco Antonio Jacob, an independent Brazilian analyst who has worked in coffee since 1978 and who has reviewed all data available from both private and official sources. He adds that the total carry-over stocks available now may be as low as between 4 and 5 million bags, which would leave the world’s supply-demand balance in a precarious state as world consumption is approaching at least 154 million bags by the end of 2015. “Any final number above 42 million bags is at this point highly optimistic,” he said.

A deficit from Brazil is always going to be challenge to meet. Whether a regular coffee lover or roaster, don’t wait to stock up on your favorite beans, it’s time to buy coffee!