One of South America’s smallest coffee producing countries Ecuador has long been a source of mystery to many in the industry. A leading exporter of soluble coffee to many European nations and key emerging market Russia figures for coffee produced in Ecuador is often confused in international statistics with the impressive volumes of coffee imported and then manufactured for instant coffee and re-exported. In the last five years the local soluble industry has received steep competition from both Colombian importers as well as from the booming domestic market. Coffee culture is on the rise but this is not keeping Ecuador’s manufacturing sector for eying continued market growth both home and abroad. In Part 2 of this special Origin Highlight on Ecuador written by SpillingTheBeans for the Tea & Coffee Trade Journal, we’ll take a close look at all the market factors moving the local market in this little known origin. 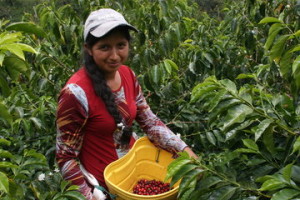 For years Ecuador has been listed as a significant coffee producer in most international statistics with annual production between 1 million and 1.2 million 60-kilogram bags. The reality, however, is that this figure reflects ‘industrial production’ of mostly imported green coffee, which then is processed and manufactured in Ecuador, before being re-exported as soluble coffee and instant products to markets in Europe and Russia.

The good news to coffee lovers is that output is growing in all Ecuador’s coffee sectors, from locally produced green coffee, to soluble manufacturing; from exports of both green and instant coffee to, in the last couple of years, growth in local consumption. Few coffee countries in the world is as diverse as Ecuador when it comes to representing all segments from production to industrial manufacturing. As one of only 15 countries in the world that produce both Arabica and Robusta coffee, Ecuador is also one of the few producing countries that has been able to build a significant local industry.

“We have a deficit in Ecuador as far as production is concerned because for the soluble industry alone we need at least 1.1 million to 1.2 million bags,” said Lorena Vasquez, Marketing Manager of Café ElCafe, Ecuador’s undisputed market leader with major soluble processing plants both in southern Guayaquil and in Manta on the coast.

Figures for both production and consumption have always been a tricky issue in the world of coffee and no more so than in the case of Ecuador because of the soluble factor. But there is no denying that Ecuador’s soluble sector has seen explosive growth, with total exports of instant coffee products doubling in the last 5 years to 1.675 million bags in green coffee equivalent in the 2012-13 crop cycle, according to the U.S. Department of Agriculture, or USDA.

Local consumption for the country of some 15 million people, meanwhile, has seen a similar explosion in the last five years and while the numbers are still small in actual volumes the increase by 41 percent in the last five years is by all means impressive. After seeing a very stable market throughout the past 20 years, consumption in the 2012-13 cycle reached 235,000 bags, up from 167,000 bags in the 2008-09 marketing year, according to the USDA. 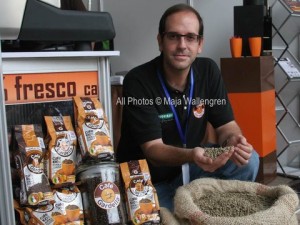 “In the last three years we have seen a revival with the consumers and that the appreciation for roast and ground coffee is starting to come back. There is definitively a demand growing for that market now, people who really want a better taste,” said Giancarlo Forestieri, market manager for Café Gardella, Ecuador’s oldest brand created in 1941.

The founding Mr Gardella had initially come from Genova as business man importing products from Italy like olive oil and ham, but quickly realized that Ecuador had all the conditions for growing good coffee. From total retail sales ten years ago when Gardella would buy between 1,500 and 2,000 bags worth of green coffee a year, the 4th generation family company today handles between 4,500 and 5,000 bags and averages monthly sales of 29,000 pounds in Ecuador’s retail coffee market. And Forestieri believes the potential for further growth is only just starting to take off.

The soluble issue is by many officials in the roasting business seen as a key problem that for years have impeded growth in the local market.

“The main problem with the local consumption in Ecuador is that people are so used to just drink soluble coffee and the today the local market is used to a bitter aftertaste. Now the market is starting to evolve and people are beginning to realize what really good coffee is and that good coffee has to come from roast and ground,” said Galo Fernando Morales, Q-grader, chief cupper and barista for Hoja Verde, which has its headquarters in the capital Quito. 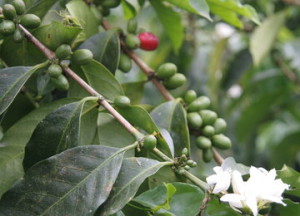 One of the boutique roasters that have emerged on the local coffee scene in Ecuador with the last five years’ boom in consumption, Hoja Verde started out as a rose producer in the cut flower business where they combined sales of roses with fine chocolate and only two years ago decided to add coffee to the company’s product list. This was in large part thanks to…

To see more details of data and figures for coffee in Ecuador, and to read the full article for FREE please see the online version the Tea & Coffee Trade Journal here: http://viewer.zmags.com/publication/f929d0b8#/f929d0b8/42

Maja Wallengren has been writing about coffee for 20 years and specialized during travels to over 40 producing countries across the world. She can be reached at: mwallengren@hotmail.com
-0-