One of SpillingTheBeans’ very first coffee origins to visit was tiny Indochina producer Laos, all the way back in 1995 when information was extremely limited and even the use of email had yet to make it to this part of South-East Asia. These were the days where receiving a fax was an exciting event and no-one would have imagined how the internet soon after would come to dominate everything. SO every time we come across a story about Laos we have to admit to feeling this early coffee adventure nostalgia rush all over again, even as in some cases like here the story actually goes back a bit — but we are happy to help share the news and Laos is definitively here to stay! From total registered production in the mid-1990s of just 160,000 (60-kg) bags, production in the last few harvest years has been reported to reach between 500,000 and 550,000 bags, a stunning development for a small country with limited resources. 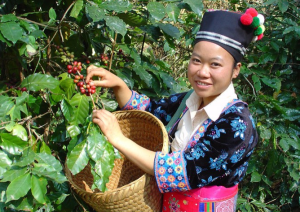 Coffee in Northern Laos, Photo Courtesy by the Saffron Coffee

SEP 2013 (GCR Magazine)–Arabica is on the rise in Laos, but there is disagreement among the organic coffee growers about whether the nation’s best export markets lie in Europe or closer to home.
Laos ArabicaLaos’ coffee industry has enjoyed a renaissance in recent years, with the volume of Arabica cultivated in the South-East Asian nation climbing sharply since 2009.

According to the World Bank, Laos’ gross domestic product reached US$9.29 billion in 2012 and the coffee industry is one of the top 10 revenue generators in the economy.