OCT 7 (SpillingTheBeans)–Arabica Coffee prices have more than doubled this year and earlier this week prices went CRAZY and surged to $2.29 per pound, the highest levels in 2 years and 8 months. The key fundamental reason for prices to raise so sharply is what is becoming a coffee disaster in the world’s largest grower Brazil, where the worst drought in over 70 years destroyed some 30 percent of the just completed 2014-15 harvest and has put the flowering of the new 2015-16 crop in jeopardy. Even before the 2015-16 flowering season, which was scheduled to start in the second half of September, the root systems of coffee trees were in bad shape as the extreme dryness has persisted in most of the coffee producing regions. But the rains failed to arrive and as the new 2015-16 coffee year officially started in October weather forecasters said the possibility of rains in the first half of October have vanished. If rains continue to be absent toward the end of October, over 70 percent of the next harvest in Brazil could be lost and what is already a precarious supply-demand balance could reach dangerous new levels as the world deficit already is seen expanding by at least 10 million 60-kilogram bags in 2015. The following report was originally written in July 2013, but explains the fundamental issues that are causing the current disaster. 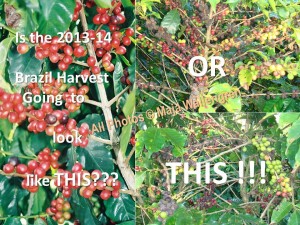 –From the September, 2013 issue of the Global Coffee Review

Brazil’s 2013-14 coffee crop was by all counts projected to be the biggest off-cycle harvest ever produced by the world’s largest coffee growing nation. But as reported in this special analysis written by SpillingTheBeans for the Global Coffee Review all the way back in August last year, evidence was already clear and available months ago of how erratic weather once again had dashed the hopes of the trade for the elusive big Brazil crop. This begs the question, if this evidence was so clear as long as 6, 8 and 10 months back, why has it taken SO long for the major players in the market for green coffee buying to correct their figures? At SpillingTheBeans we don’t pretend to be so arrogant to say we have the best figures and sources in the whole world of coffee — but we are happy to share the insight we get from them in a timely manner and as soon as it is available. Could the massive delay in correcting too high figures downward have something to do with too many of these same buyers and traders simply playing the card of speculative trade and market manipulation solemnly in order to ensure they could cover their short positions as cheaply as possible?

Speculation about the size of the Brazil crop is nothing new as Brazil continues to supply between 35 and 38 percent of the entire world supply of coffee in any given average cycle. Even in off-cycle years, which traditionally have produced lower volumes as trees are stressed and recovering from high yields in the on-cycles, the arrival of the Brazil crop in May will ease pressure on the market.

This year has been no different from that pattern, but from the first round of flowering for Brazil’s 2013-14 harvest all signs have been for an unusually healthy crop. Even Conab, Brazil’s official crop supply agency, said in its 2nd forecast released for the new harvest in May that it expects the current Brazilian coffee crop to be the biggest on record for an off-cycle. From Conab’s conservative estimate for a crop of 48.6 million 60-kilogram bags to the other end of the range where Volcafe/ED&F Man has pegged Brazil to produce close to 48 million bags is an impressive gap of 10 million bags in difference. Even for Brazil, said one physicals trader in the U.S. green coffee market, this is speculation at “a whole different level” and cause uncertainty to the market as to how much coffee realistically can be expected in new supply ahead of the onset of the main roasting season in the key U.S. market late September.

As always in the coffee cycle, when it comes to weather timing is crucial throughout the harvest season from the first flower to the final cup.

“I was astounded during my trip to see this year’s off cycle crop. It’s the best off cycle crop I have seen during my last 12 years to see Brazilian coffee crops,” said Carl Leonard, vice president for Green Coffee at U.S. roasters Community Coffee. He attributes the high yields to better crop husbandry and increased use of fertilizer thanks to the high prices in 2010 and 2011. He was speaking in an interview in early July.

But the hopes for what started out as the potential perfect crop in Brazil has since then quickly been dashed. First came the heavy unseasonal rains in the last half of June, a fact which even the most bearish market players who initially had been pointing toward a harvest of at least 54 million bags now say did indeed cause significant damage to quality and some losses. Then came the frost in July in southern Parana, and while this is one of Brazil’s smallest growing regions today with about 2 million bags this nevertheless add to the losses.

“The widespread rains that are mitigating the effects of the cold front in the region could hurt the quality of coffee now being harvested as it interrupts the drying process of the beans and infuses a bitter taste, reducing its value on the market,” said German Analysts F.O.Licht in its July market report.

But the most significant damage factor of all goes all the way back to January and February when excessive dryness hit the top producing regions in Brazil’s largest robusta coffee belt in the East-Coast state of Espirito Santo. While traders and exporters at the time played down the impact of the dry-spell the damage has been so extensive from the drought Brazil will be unable to produce more than 49.4 million bags, said veteran Brazilian coffee trader John Wolthers of Santos-based exporters Comexim. He said the company had cut its forecast for the new harvest by a whopping 3.8 million bags, all for output from the new Brazilian robusta crop, also known as conillon coffee and for which harvesting had been fully completed at the time of publication.

“Concerning conillon, we originally estimated a crop of 16,8 million bags, which we are forced to reduce volume outcome to about 13 million bags. This important volume reduction was due to lack of rains in Jan and Feb of this year and also caused a reduction of yield. Beans are smaller than in normal years due to lack of humidity at the right time,” Wolthers said in an interview. “As for the Arabica crop, the harvest is of not so good quality because of the long and constant spells of rain during June. We maintain the overall expectation for the Arabica harvest to be of 36.4 million bags but with the lower conillon number, we reduce our overall Brazilian production to 49,4 million bags,” he said. 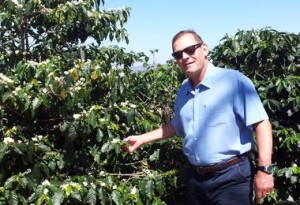 Not all industry stakeholders in Brazil are that optimistic as far as the Arabica crop is concerned, with officials at the Cooxupe cooperative, the world’s largest coffee cooperative based in the Southern Minas town of Guaxupe, noting that bean size in the new Arabica crop has been

“According to the reports we had received by July 24 the bean size is much smaller this year, and only 22 per cent of all the coffee processed to date reached bean size screen 17 compared to 35 per cent last year,” said an official in the grading department at Cooxupe.

The good news to coffee lovers is that with less robusta in the market, and additional weather problems reported to have cut down on robusta supplies from Vietnam and Indonesia, overall quality of the coffee available to consumers is up.

Analysts expect that part of the shift by roasters from arabica to robusta, which the market witnessed following the 14-year-high prices in 2010 and 2011, this year will shift back to higher quality blends based on an increased share of arabica beans.

Back in Brazil, roasters are already reporting seeing this exact trend developing, and as consumption continues to rise in the local market with Brazilian demand pegged to rise to about 21 million bags in the 2013-14 marketing year, some analysts even speculate that this now will lead to an even higher rise in domestic consumption in Brazil.

“Brazilian coffee consumption is rising 3.0-3.5%,” said French bankers and financial services company Societe Generale, which said this combined with the current lower prices for consumers would likely “encourage more consumption” and an even higher increase in consumption in the year ahead.

-For more details of this article and other coffee reports, please go to: https://globalcoffeereview.com/market-reports/view/rain-and-drought-put-brazils-crop-in-doubt