Coffee is proving a driving force in Vietnam’s prosperity, with the quality coffee bean offerings from Buon Ma Thuot a central player. 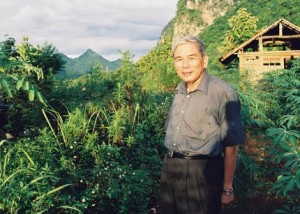 DECEMBER 2013 (GCR Magazine)–Yna Ayun, a coffee farmer from Vietnam’s central province of Dak Lak, is a contrast to the romantic ideals of rural farming.

Walking past a US$28,000 Hyundai Utility truck he bought eight months ago, he pulls out his Samsung Touch smartphone and sends a quick text. A few seconds later, his phone beeps, letting him know a kilogram of coffee was priced at 35,200 Vietnamese Dong (VND), or US$1.67. “That a VND500 decrease,” he says.

Despite the price drop, Yna smiles with confidence, explaining to Global Coffee Review: “The harvest is coming and the price normally drops until we start harvesting coffee in the next one to two months.”

Yna is an Ede ethnic minority farmer from Ea Tun Village, one of the most well-known coffee plantation areas of Vietnam’s top coffee producing region Buon Ma Thuot. For Yna, checking coffee price has become as ingrained in his daily routine as eating rice.

A few days later, when Yna checks on his crops, his lifestyle benefits from the happenings of the London Liffe exchange, where coffee is being traded at US$1734 per tonne that day, a slight increase of US$1.00 or 0.06 per cent. The lift is attributed to a slowdown in exports from Indonesia, the third largest exporter of Robusta after Vietnam and Brazil.

Yna, however, is in no rush to sell. His farm is seeing a bumper crop this year.

Where modern telecommunications technology has brought to Yna the same information that was previously only available to traders and roasters, modern cultivation technology has helped him increase his yields. These are important development in a region that depends largely on coffee for its income.

According to statistics from the Dak Lak People’s Committee, more than 64 per cent of the province’s population – over 1 million farmers – are growing coffee as their primary activity. In addition to farmers, the coffee industry is responsible for more than 300,000 jobs in the whole area. The region produces more than 400,000 tonnes of coffee per year, contributing to around 40 per cent of the country’s production. At the national level, Buon Ma Thuot has played a key role in Vietnam’s success as the world’s top Robusta exporter, and second coffee exporter after Brazil, for the past 12 years.

Buon Ma Thuot is well placed to do so, at only half an hour by plane from Ho Chi Minh City, Vietnam’s biggest economic hub. The region is also well connected to the national road system.

Coffee is grown widely in many districts of Dak Lak province. However, coffee from Buon Ma Thuot is renowned for its high quality and distinct taste. Buon Ma Thuot coffee now benefits from geographical identification, and the region is generally considered the coffee metropolis of Vietnam.

Coffee was first introduced to the region by French colonists in 1857. With ideal growing conditions, coffee from Buon Ma Thuot gained a reputation for its superior taste characteristics between the 1920s and 1930s. The region benefits from Basalt soil, and is 500 metres above sea level. Despite the American war, which devastated much of the country, coffee areas remained relatively unaffected. They even managed to increase by a few thousand hectares to 20,000 hectares by 1975, when the Americans withdrew and the country was reunified.

Vietnam’s global success in coffee, however, was sparked following the Vietnamese government’s move to liberalise the economy in 1986. Coffee production has since boomed, with astonishing results.

According to the United Nation’s Food and Agriculture Organisation, Vietnam’s coffee areas were growing by 23.9 per cent a year during the 1990s. In 1997, the country was the world’s fourth largest exporter after Brazil, Colombia and Indonesia. Only three years later, Vietnam passed both Indonesia and Colombia to become the world’s second largest exporter, at a total export volume of 734,000 tonnes. The country has kept that ranking ever since. Last year, exports reached a record increase of over 30 per cent to 1.7 million tonnes, helping bring in US$3.67 billion in income. That level of export overtook Brazil’s top position. Currently, Vietnamese Robusta accounts for 70 per cent of Robusta traded in the world.

The expansion of plantation areas in the country has played a key role in these achievements. Interestingly, the global economic crisis has not had an adverse impact on the development of coffee in the country. “Arabica price have jumped too high, forcing roasting businesses to increase the amount of Robusta in coffee products in the West to reduce production cost,” says Le Duc Huy, Deputy General Director of Simexco Dak Lak, the state-owned biggest exporter in Dak Lak Province.

Huy points out that in the past three years, the price gap between Arabica and Robusta has narrowed by 300 per cent, down to around 30 per cent.

Emerging demand in Asian markets, such as China and South East-Asian countries, has also helped significantly. As these markets largely prefer instant with Robusta as the main ingredient, this has further helped drag the price of these two coffee beans closer. “If it continues, Robusta price will even advance against Arabica,” says Huy.

Traders and roasters have seen these opportunities in Vietnam. In an effort to reduce costs, some roasting companies have started setting up their businesses domestically. A trader from Dakman Ltd., a processing and export company under ED&F Man Corporation, says that some of the company’s biggest clients have started launching their own factories in Buon Ma Thuot to take advantage of cheap labour and a zero export tax incentive by the government.

As a result, domestic businesses, who are looking for a way to increase the value added from coffee, are now debating whether it’s worth investing in the processing industry.

“The processing market has been occupied by foreign giant corporations. It’s very difficult to compete with them in that area. So the only way for the industry is to stay focused in what we are doing,” says Trịnh Duc Minh, Standing Vice Chairman of Buon Ma Thuot Coffee Association.

According to the Ministry of Agriculture and Rural Development, the country currently has a total of 616,000 hectares of coffee, much higher than the targeted 500,000 hectares of the Ministry’s Coffee Development Plan 2020 vision 2030. The ministry is now looking to reduce on planted areas, and instead focus on improving the quality.

The latest figures from Dak Lak provincial authorities released in mid-October show that coffee areas in the region reached 202,000 hectares. More than 23 per cent are old coffee trees, which have a low production capacity of 2.2 tonnes per hectare.

To encourage farmers to look after their crops, Dak Lak authorities announced at the end of May VND3 trillion (US$142.1 million) in loans, at 10 per cent interest, to replant coffee.

“Farmers are the foundation of the industry, we cannot survive without them. It is not right when we can make a lot of money thanks to what they provide while they drown in poverty,” says Dang Le Nguyen Vu, Chairman of Trung Nguyen Corporation, the biggest domestically-owned roasting and instant coffee business in Vietnam.

A rags-to-riches story, Vu was named by Forbes as Vietnam’s Coffee King. He emphasises the importance of maintaining good relations with farmers in the region. Trung Nguyen employs more than 3000 people in Vietnam, with a quarter of those in Dak Lak. The company has started a project that provides training to coffee farmers on personal financial management.

In the 2000-household village, with a population of more than 10,000, nearly 98 per cent are Ede ethnic minority group. The majority have been growing coffee for three to four generations, however their experience is often limited outside of coffee growing.

“I grow coffee because everyone here does,” says Hrue Hwing, an Ede villager.

In this village, the only habitants who don’t grow coffee are those who don’t own land. For a long time, each household in the village could only get 2 tonnes a year from their single hectare plantations, due to poor cultivation traditions.

Trung Nguyen has introduced the UTZ certified model to villagers, and has sent experts to hold courses at the village to teach farmers on cultivation techniques. An annual training course for the whole village has been carried out since 2010. The coaching has also been conducted on site at farmers’ plantations. Farmers are taught to keep a diary of all activities related to planting, including fertilizing periods, amounts, production yields and revenue.

Along with skills training, Trung Nguyen has made a significant investment installing Israeli drip irrigation systems to support farmers coping with deranged weather. The system provides irrigation directly to the root of the tree and fertilises according to need. The system helps save on water during the dry season, that seems to get worse each year.

The pilot was first conducted with the village patriarch, Ama Chuong, at no cost. Chuong has been attending Trung Nguyen training sessions since they were first introduced, and understands the benefit of taking proper care of his plantation.

“It’s great. I’m very happy that I have it. I can save a lot of money and water. The greatest thing is that it helps my plantation survive during the dry season,” says Chuong. The first year the irrigation system was introduced, Chuong saw a 1 tonne increase in yield to 2.6 tonnes per hectare. His farm has produced 4 tonnes per hectares since 2011. The local authority has since adopted a joint investment with Trung Nguyen, the government and the farmers at the rate of 50-40-10. The systems cost around US$2800 per farm. “I’m proud of Vietnamese farmers. They are very hard working and always eager to learn,” says Vu.

Three more farmers have applied the new watering system to their plantation including Yna, who is expecting to produce at least 1 tonne per hectare higher than last year. Other farmers are similarly looking at the investment as a necessary step to increase their incomes. “There is no more land to expand the plantation. I have to find a new way to improve the productivity,” says Hrue, a 60-year old farmer.

Trung Nguyen currently supports farmers by paying a premium of US$20 per tonne over the market price for the coffee it purchases. “We work towards sustainable development in the region, brought up from the quintessence of the coffee tree,” says Vu. “We are doing business but we want to create a win-win situation.”