SPECIAL REPORT: With Conflicting Coffee Data, What to Believe?

FEB 4, 2018–Dear friends and followers across the world of coffee. As SpillingTheBeans is getting ready to speak at the Stuttgart Coffee Summit starting this Sunday Feb 4th, we are excited to re-publish this analysis from three years ago. Even though a number of the crop figures have changed the overall topic and analysis remains as relevant as ever, and with the bottom-low prices coffee farmers continue to face we welcome all coffee aficionados to read up on this important challenge. Happy Coffee Drinking!

From the most bearish of estimates for Brazil’s new 2013-14 crop to the most bullish forecasts
for what by all counts are expected to be the biggest coffee harvest in an off-cycle in the world’s largest coffee grower, there is a stunning difference of 10 million 60-kilogram bags. Add to this the differences in crop forecasts and consumption views from all other countries across the globe, and it’s no wonder that many in the world of coffee agree it’s increasingly difficult to know what is really going on. With so much conflicting data, what is credible data in coffee? And if we don’t really know how much is either produced or consumed, how do roasters, traders or buyers decide what to base sound business decisions on? 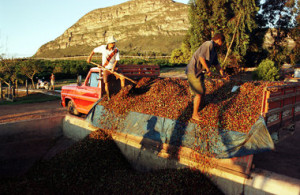 When the 2012-13 international crop cycle officially started last October both the ICO and USDA came out and pegged the new world crop within a reasonably close range between 148 and 151 million bags, just about everybody welcomed the more balanced view. But this would soon start moving in opposite directions and with market volatility growing and prices fluctuating increasingly it would appear that ICO and USDA have grown more apart than ever.

The ICO primarily releases forecasts based on the official estimates issued by governments in producing countries, and the organization is frequently criticized for not exercising more individual analysis when presenting its forecasts in monthly market reports. The USDA, in contrast, is by many stake holders in producing countries primarily seen as supporting the large multinationals that dominate coffee buying and trading.

“If you go by the ICO forecast, year after year they are pretty consistently going to be in the lower range while the USDA is constantly in a higher range. When you have these forecasts none of these institutions or agencies want to give out numbers that could cause any significant impact or disruptions to the market and they will use politics and diplomacy to let the market makers make the market,” said Marco Ruttimann, a partner in the Miami-based brokerage Coffee-Link International.

The troubling news to some in the market is that even if the verification and analysis behind some of the key figures in coffee statistics are improved, there is no easy telling whether this will have any significant impact. The fact remains that the very biggest volume of all forecasts come from the market itself and from private companies that, essentially, have established their entire basis for doing business on buying and selling coffee at a profit.

“The question you have to ask if whether forecasts by any of these companies really can be considered objective because all these companies make a living by trading coffee at favourable levels to generate profits,” said a physicals trader with a big hedge fund in New York. “Just because the data coming from these companies dominate the flow of forecasts and you have more than ten times figures for these companies than what you see from the ICO doesn’t make it any more correct than the one or two forecasts that stand out by not following the trend,” he cautions.

***
For the full copy of my special report on Credible Data in Coffee, please see the July edition of Global Coffee Review.http://globalcoffeereview.com/economics/view/what-conflicting-coffee-data-can-you-believe

*Subscribe to the Global Coffee Review, available for free via iPad at
https://itunes.apple.com/app/id584714407

EXCLUSIVE: Coffee Culture Booming In Middle East As Tradition Blends With Modern Ways
“What Inspired You To Be A Coffee Enthusiast?” — Special Q&A With SpillingTheBeans!