SpillingTheBeans Prepares New Videos On State Of Coffee In Mexico

It has been a busy start to 2017 and now, almost half-way through the year, we are excited to bring you a special update on one of the latest projects that SpillingTheBeans has been working on. Starting this week, we are going into the editing phase of a series of new videos on the history and state of coffee in Mexico, SpillingTheBeans’ adopted home country and one of the world’s top-10 coffee producing nations as well as home to the world’s first growers of certified organic coffee. 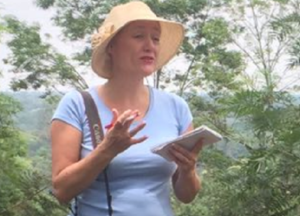 Here in the picture, in the state of Veracruz, filming during one of four trips SpillingTheBeans’ author and owner Maja Wallengren made between January and April to Mexico’s Top-3 coffee producing states of Chiapas, Veracruz and Puebla.

After four years of crisis in Mexico and Central America due to the growing negative impact of climate change and the devastating outbreak of the rust coffee crop disease, from southernmost Chiapas state to Veracruz on the Gulf Coast, Mexico’s proud coffee growers are making heroic efforts in order to ensure the country’s over 200-year-old coffee growing traditions survive into 21st Century.

In special collaboration with the Mexican bilingual coffee magazine El Mundo del Café, we are putting a number of videos together in which SpillingTheBeans talk about the history of coffee in Mexico and in Veracruz, and how the country’s growers are dealing with the rust pest in order to recover the coffee production that has been lost.

Visiting coffee growers in the state of Veracruz in April with the amazing Mexican cupper and COE judge Araceli Garcia (filming) we are proud and honored to be working with El Mundo del Café on this project.

Stay tuned for news of how the videos are coming along via SpillingTheBeans’ facebook page as well as that of El Mundo del Café;