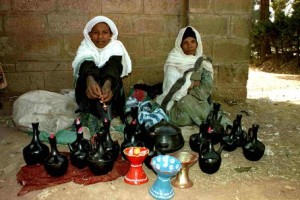 This should dramatically help raise the film’s profile, and maybe even assures that it’ll get some kind of a distribution deal here in the USA, after its Sundance premiere.

A project we first alerted you to during the summer of 2012, and have been following since then, writer/director Zeresenay Mehari’s Difret (it was previously titled Oblivion) is a feature length scripted film based on the true story of the legal-precedent-setting court case that outlawed the practice of abduction for marriage in Ethiopia – also referred to as “Telefa.”

It was last summer (2013) when the filmmakers raised close to $30,000 via Kickstarter to complete post-production on the film, which was shot in Ethiopia last year on 35mm film (a rarity these days, especially when it comes to indie filmmaking), thanks to support from a production package from Panavison Cameras, Pipeline Production, the Ministry of Culture Ethiopia, and others, including a previous successful Kickstarter campaign that raised almost $40,000 of the film’s mid-6-figure budget.

It tells the story of a 14-year old girl named Aberash Bekele who was accused of murder after killing the 29-year old man who raped, beat, and abducted her in an attempt to marry her.

Aberash was charged with murder and kept in prison without bail until a female lawyer named Meaza Ashenafi heard about the case and decided to represent Aberash.

With immense odds against them, the 2 women fought a harrowing drawn-out legal battle over a two-year period that would eventually change the lives of Ethiopian women forever.

“It is inspiring to see such an important story so beautifully illustrated with such creative talent. It draws out the richness of Ethiopian culture and shows how important legal advances can be made while respecting local culture,” said Angelina Jolie in a statement. “It is a story that gives hope for Ethiopia’s future, and for other countries where countless girls grow up without the protection of laws that shield them and their bodies, and shows how the courage of brave individuals can awaken the conscience of a society.”

By the way, it’s worth noting that Jolie’s adopted daughter Zahara is Ethiopian. She and hubby Brad Pitt have also given millions of dollars to help fight HIV/AIDS and tuberculosis in the country.

Here’s the official synopsis of Difret from Sundance:

Meaza Ashenafi is a young lawyer who operates under the government’s radar helping women and children until one young girl’s legal case exposes everything, threatening not only her career but her survival.

The crew shot 6 days a week and on average 14 hrs a day. In front of the camera, we had 71 actors with speaking roles, 300 extras, and numerous horses, donkeys, and sheep. Our youngest actor was 7 months old and the eldest, in his mid-80s. We used trucks, cars, and animals to move our 3 tons of grip and electric gear as well as the three 35mm cameras that weighed over 2,000 pounds from one of our 37 actual locations to the other. Of note, Oblivion [now Difret] is the fourth film ever to shoot on 35mm film in Ethiopia. It is also the first to develop in Mumbai, India and the first Ethiopian film shot by a female DP. Last but not least, we were also the first Ethiopian film to have almost half of its crew comprised of women with most holding leadership roles. Thanks to everyone who has generously supported this project especially our most recent donors who made post-production possible. We can’t wait to finish the film and share it with all of you.

And we can’t wait to see it!

Kudos on completing the film, the Sundance selection and for all the “firsts.”