The Onset Of Colombia’s Coffee Crisis Started In 2008 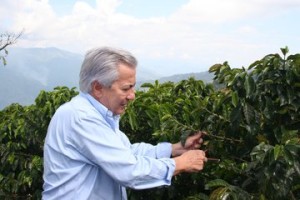 When the climate crisis started in Colombia it was here in Antioquia that signs of the severe impact of erratic weather first started to show in the 2008-09 mitaca crop, the Colombian mid-harvest that is picked from late March or early April through August. The mitaca that year was reduced to one of the smallest on record after a complete failure of rains during the most crucial part of the flowering season. Total production in Colombia in the 2008-09 harvest plummeted to just 8.664 million 60-kilogram bags after three consecutive years with output over 12.5 million bags. Here Colombian producer and analyst Pedro Echavarria in Antioquia.