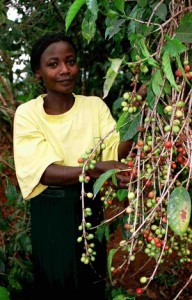 JULY 20 (SpillingTheBeans)–Coffee production in Uganda in the current 2012-13 crop cycle is on track to reach between 3.3 million and 3.4 million 60-kilogram bags, up at least 6.5 percent on production of about 3.1 million bags in the previous cycle, the Uganda Coffee Development Authority, UCDA, said this week.

The last harvest has been coming along significantly better than in the last few years where Uganda has been hit by a number of weather problems, from deadly landslides in the Arabica growing regions of Mount Elgon in eastern Uganda, to
excessive dry weather in the southern and south-western regions, which mostly grows robusta coffee.

Ugandan coffee exports in the first nine months of the 2012-13 crop cycle from last October through June were up 31 percent to 2.64 million bags, the UCDA said. Flowering for the next 2013-14 harvest, meanwhile, has so far been within “normal conditions” without any major weather upsets, said an official at the UCDA.