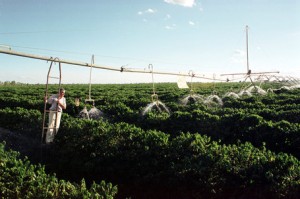 MEXICO CITY, Jul 1 (SpillingTheBeans)–The U.S. Department of Agriculture, in its first annual forecast for the 2013-14 coffee marketing year, peggs the new harvest in the world’s largest coffee producing country Brazil to fall 2.4 percent to 53.7 million 60-kilogram bags. This compares to production in the last 2012-13 crop cycle of 56.1 million bags, a figure which the USDA revised upward from its previous figure of 55.9 million bags.

The USDA attributes the lower crop to the traditional biennial cycle where trees produce less in the harvest that follows a bumper crop as they are recovering from the stress associated with producing high yields. But as widely discussed in the market during the last few years, the balance in Brazil between the off-cycle and on-cycle has gradually been smoothened out during the last five years as replantings with higher tree density has allowed for average yields across the producing regions to stabilize.

“Though the year-over-year difference in Arabica output is expected to narrow, last year was affected by frost and dry conditions in Minas Gerais, its main growing region. More importantly, Arabica’s off-year forecast continues the biennial
growth trend. The Robusta harvest is forecast to continue expanding as favorable weather and good crop management aided fruit settings and development in Espirito Santo, where the vast majority is grown,” said the USDA in its “World Markets and Trade” report on coffee which is released twice a year, in late June and early December.

The USDA figure is higher than the forecast by Brazil’s official crop supply agency CONAB which last May said in its 2nd forecast for the new 2013-14 harvest it expects the new Brazilian coffee crop to yield 48.6 million bags, the biggest ever production volume yielded in an off-cycle.

Stay tuned for more details from the USDA coffee market report for 2013-14.