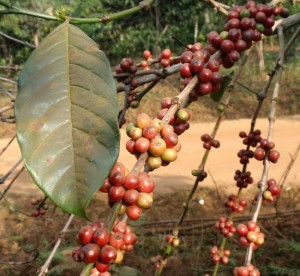 DEC 13 (SpillingTheBeans)–The U.S. Department of Agriculture on Friday said it has forecast the 2013-14 world coffee harvest to drop 2.8 million 60-kilogram bags to a total of 150.5 million bags. This compares to total world production in the last 2012-13 cycle of 153.3 million bags, and the drop is attributed to varying degrees of weather damage to the crops in the world’s largest grower Brazil, as well as in Indonesia, Mexico, Peru and Central America.

In one of the most notable modifications, the USDA lowered its forecast for Brazil’s robusta coffee crop by 1.3 million bags following weather damage by drought in the key robusta growing state of Espirito Santo but at the same time upped their figure for Brazil’s arabica crop by 0.7 million bags. For the world’s second largest producer Vietnam, however, the UDSA hiked its figure by a whopping 3.7 million crops saying it believes Vietnam will produce a record crop of 28.5 million bags.

“Global production is now forecast at 150.5 million bags, down 2.8 million from the previous year as Vietnam’s record output is more than offset by declines in Brazil, Indonesia, Mexico and Central America. A modest increase in world exports is expected
on strong shipments from Vietnam and Colombia,” said the USDA.

SpillingTheBeans has travelled regularly to Vietnam for over 20 years and visited coffee growing regions there and has been an active eye witness to the impressive growth in production in the South-East Asian giant since long before the USDA first set foot in Vietnam. We have yet to see any evidence of this alleged record crop in Vietnam, and all indicators are that the new 2013-14 harvest will be smaller than the last. We believe the USDA is making a classic USDA mistake, by not understanding the impact on prolonged dryness in the early stages of flowering, which with no exemptions will lead to smaller bean size and a higher share of black and broken beans, hence resulting in a significant cut in productivity. Interestingly enough, while the USDA for Indonesia argues that this situation of dryness affecting the early flowering period is exactly what has led to a sharp reduction in the Indonesian crop, the USDA now says Vietnam has avoided that. This is highly unlikely, but as the Indonesian crop cycle starts 6 months before the one in Vietnam, we will likely not see any adjustments to the Vietnamese figure until the next USDA review come out in June 2014.

Evaluating all the forecasts for the 2013-14 crop cycle SpillingTheBeans furthermore finds that the USDA overall has pegged the 2013-14 world coffee crop between 5 and 6 million bags too high, while at the same time bases its forecast for global demand on consumption in the year through 2012-13 rather than 2013-14. Hence in SpillingTheBeans view, if we take these adjustments into account, the overall world-balance is in a best case scenario going to be flat in the 2013-14 crop year but could very likely result with a final figure showing a deficit of about 2 million bags. Roasters beware!

The USDA did not give any indications of how it sees the flowering for Brazil’s next 2014-15 harvest coming along.

For more analysis from SpillingTheBeans on WHY the next 2013-14 World Coffee Crop is likely to produce another deficit, please see our “Market Insight” section:
http://spilling-the-beans.net/market-analysis-world-coffee-market-headed-for-new-deficit-in-2013-14-cycle/