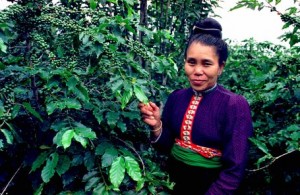 The core-root of Vietnam’s coffee policies was never about market dominance, but rather always about “social development” and when the government launched the expansion plan for Arabica it was all about how to address the issues of poverty in the northern-most remote provinces with a high concentration of ethnic hill tribes, such as the Thai, Muong and Hmong. Vietnam is home to over 50 ethnic minorities and in Son La province it is particularly the Thai minority that has embraced coffee growing as seen in this picture.