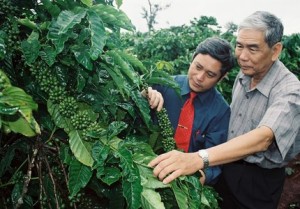 SEP 24, 2014 (Reuters/AsemconnectVietnam)–Vietnam’s 2014-15 coffee crop is expected to fall to around 25 million 60-kilogram bags, the vice chairman of Vietnam’s coffee and cocoa association Vicofa said on Tuesday.

Speaking on the sidelines of a forum hosted by the International Coffee Organization (ICO), Vicofa’s Do Ha Nam said production was expected to fall around 10 percent from the previous year, due to a combination of aging trees and heavy rain in some areas.

Do said that excessive rains fell in Vietnam’s Lam Dong province, where around 20 percent of the country’s coffee is produced, hindering crop development during the flowering phase.

Vietnam is the world’s top grower of robusta coffee, a hardy, caffeine-rich variety.

A longer-term issue for Vietnam’s coffee sector is farmers switching to grow pepper, Do said.

“Around 20 percent of trees in Vietnam are over 20 years old but farmers, instead of planting new coffee trees, are switching to pepper, so production will probably decrease,” Do said, referring to the long-term outlook.

Do estimated Vietnam’s coffee area had stabilised at around 600,000 hectares. In pepper, he said around 60,000 hectares were planted, but this was rapidly growing by around 10 to 20 percent per year.

“Profit is the main reason for switching to pepper,” said Do, who is also the chairman of Vietnam’s Pepper Association, and chairman of one of the country’s largest coffee exporters Intimex Group.

China is the fastest growth market for Vietnam’s coffee exports, but Do said it was hard to quantify the volumes due to its shared borders with Vietnam, which enabled both green coffee and already processed instant coffee to go overland unrecorded.