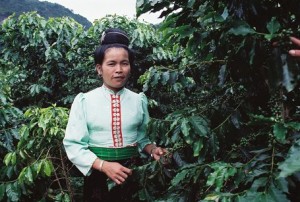 The “Coffee Development Plan” was put into motion by Vietnam’s Agriculture Ministry in Hanoi between 1970 and 1971, well before the official end of the Vietnam War in April 1975. The war-era government realized that once the war ended the country would face a major challenge trying to provide both jobs and food security for the large population of close to 70 million people. The plan was especially designed to address social development and poverty eradication among Vietnam’s many ethnic minorities.