An exchange for the better: Coffee on the Ethiopia Commodities Exchange (ECX) 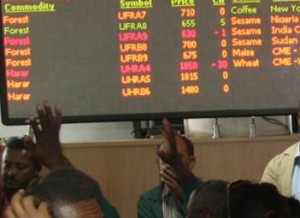 NOV. 2011 (GCR Magazine)–Something remarkable is happening in the storied coffee forests of Keffa. Green shoots are sprouting in the hills to the southwest of the capital Addis Ababa where it’s traditionally thought that our first encounter with coffee occurred. As the story goes, it was on these slopes in the ninth century that Kaldi, an Ethiopian goat-herder first noticed his animals chewing red berries that seemed to make them jump and dance.

More recently, record exports from Africa’s largest coffee producer and sustained high prices are giving their own boost to the country’s patchwork of highland growers. Trade figures for 2010/11 showed a record return from Ethiopia’s coffee exports of US$879 million, which translates to a 59 per cent surge in revenue on the previous year.

At the centre of the export success story is the country’s commodity exchange, the ECX, set up in 2008 to replace an auction system that critics said was unreliable and murky. In its first three years the exchange has centralised the trading of coffee, maize, sesame and beans on a modern trading floor where screens flash up prices for coffee from New York and sesame from India, West Africa and neighbouring Sudan.

The bourse has already been credited with aiding Ethiopia’s relatively robust management of this year’s devastating drought and famine. And since its introduction, total coffee production has leapt from 5 million bags to close to 7.5 million with output of export grade coffee more than doubling.

The main architect of the exchange is Eleni Gabre-Madhin, a former World Bank Economist and expert on managing grain resources, who was drafted by the government from the International Food Policy Research Institute (IFPRI) to mastermind an overhaul of its agricultural trade. As CEO of the exchange, she has championed producers’ right to a fair price on the open market as an incentive to increase production.

To see the Full story:
https://globalcoffeereview.com/economics/view/an-exchange-for-the-better-coffee-on-the-ethiopia-commodities-exchange-ecx
-0-