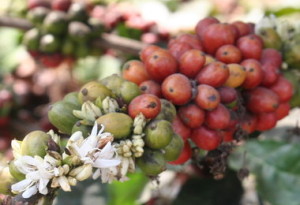 JAN 9 (SpillingTheBeans)–Brazil’s official crop supply agency Conab on Thursday pegged the next 2014-15 coffee harvest in the world’s largest producing country to yield a harvest between 46.5 million and 50.15 million 60-kilogram bags. The physical harvesting of the new Brazilian crop will start in late April.

The drop in Conab figure is in line with a number of recent forecasts from agronomists saying the flowering of the upcoming crop in Brazil has suffered severe damage from a combination of excess rains, tree recovering from two consecutive bumper crops and the lack of adequate input such as fertilizer due to near 5-year low prices for most of the past six months.

The figure is also in line with SpillingTheBeans’ projections for Conab to come out with an initial forecast for the new harvest to produce a crop in a range between 49 million and 50 million bags, although falling below our expectations for the lower end of the Conab range. This, however, is typical behavior of Conab, to settle on a lower low in its range to offset figures against the higher end of private forecasts and reach a more realistic overall average of figures for crop projections.

SpillingTheBeans believe current weather condition in Brazil allows for a forecast of the next 2014-15 crop to come in between 48 million and 50 million bags, but this will obviously need to be monitored in coming months.

The flowering process for the next 2014-15 Brazil coffee harvest is currently in the stage known to agronomists as the “bean formation” in which cherries have developed into produce half of the final beans size and are particularly vulnerable to adverse weather. Both an excess of rains or excess of dryness will at this stage result in bean formation being cut short, either producing smaller beans or resulting in a higher percentage of black and hollow beans, also known as floaters.

Stay tuned for more news on the next Brazil crop.

*For more on the new Somar figures lowering their Brazil crop views and why, please see: http://spilling-the-beans.net/brazils-somar-cuts-estimate-for-2013-14-crop-by-3m-bags-to-51m-bags-predicts-rain-damage-in-2014-15/

*For more on the Volcafe report and the group’s dramatic cut in both current and next crop figures for Brazil: http://spilling-the-beans.net/harvest-analysis-volcafe-cuts-2013-14-crop-view-for-brazil-by-3-8m-bags-pegs-14-15-down-to-51m-bags/