MAY 22–6:12p.m. EDT–UPDATE: Active July arabica coffee futures settled higher on Tuesday as news of the season’s first serious attack of coffee frost in Brazil took the market by surprise.

“Reports of an unexpected and early frost, albeit a light one, reached some lowland areas Sao Paulo and Minas Gerais. This raised concern about potential crop damage and spurred some buying on the futures market,” traders told Reuters news. 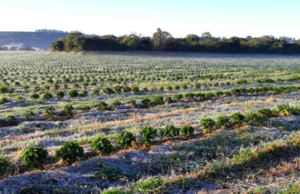 MAY 22–07:22a.m. EDT–UPDATE: Pictures of coffee farms in Brazil with frost damage in the Cerrado region of Minas Gerais state and Parana have been published both by growers, who have sent pictures directly to SpillingTheBeans from Brazil, as well as on NoticiasAgricolas.com.br, a local Brazilian broadcaster. Osmar Pereira, President of the Patrocinio Rural Union, said the current cold front has produced “a moderate frost” attack. The current frost attack on Tuesday hit the entire key southern coffee producing belt of Brazil for a second day in a row. Pereira said it’s too early to predict the impact from frost to the new coffee crop, for which harvesting started in earnest this month. The pictures seen to date do not indicate any major damage level but traders caution that we are at the very beginning of what potentially can be one of the earliest and most severe frost seasons to hit the Brazil coffee industry in years. 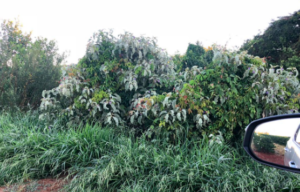 MAY 21–8:52p.m. EDT–UPDATE: Growers in Brazil’s key Cerrado coffee producing region in Minas Gerais State are reporting that the new 2018 harvest in the area near Patrocinio has suffered damage from the intense cold weather that hit Brazil’s main southern coffee growing belt at dawn Monday, local news NoticiasAgricolas.com.br said in a report. The Cerrado region is the world’s leading coffee region when it comes to technology and modern agriculture and has in good crop years produced over 7 million 60-kilogram bags. The cold front is forecast to continue through Tuesday May 22.

MAY 21–11:32a.m. EDT–UPDATE: Intense cold weather has hit Brazil’s main southern coffee growing belt but at this point there is not yet any confirmation of whether the low degrees has caused damage to the new 2018-19 coffee crop from the world’s largest coffee growing nation. The cold weather is forecast to continue through the next 24 hours and local weather services say the current season could be one of the coldest and potentially more threatening in years to hit Brazil.

MAY 21–00:44a.m.EDT–UPDATE: Temperatures are reported to have dipped to as low as 2 and 3 degree Celcius in many key coffee regions in Southern Minas.

Dear Followers, the 2018 coffee FROST SEASON has arrived in Brazil with the year’s fist big cold front confirmed to hit a substantial part of the growing areas of the world’s largest coffee producing nation May 21-22. As always, we pay close attention to any risk of frost hitting the new crop in Brazil, for which harvesting started in earnest this month. Follow us here at Spilling The Beans for more details. 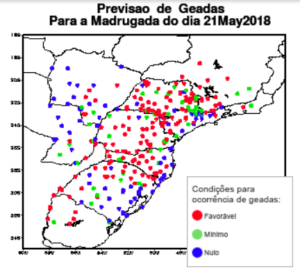 MAY 20, 2018 (SpillingTheBeans)–Brazil’s southern coffee belt, an area that account for about two thirds of the country’s entire Arabica production, will be hit by potentially damaging frost Monday and Tuesday when an intense cold front swipes through Parana, Sao Paulo and Southern Minas, local weather forecasters confirmed late Sunday.

Coffee frost starts when temperatures dip below +3 to +4°C where coffee can suffer damage if exposed to the cold during an extended period of time. 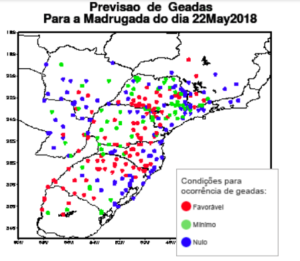