APR 20–May Arabica prices surge 1.80 cent per pound to $1.2765 c/lb in mid-session at the ICE futures exchange in New York on Apr 20 on continuing DRYNESS in Brazil’s coffee regions and stronger Real. 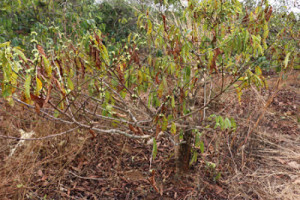 APR 11, 2016 (SpillingTheBeans)–Coffee farms across Vietnam’s key producing regions of the Central Highlands have been severely hit by the worst drought in 90 years to hit the country, local producers and news said Monday.

“We are not joking here, this is very very serious and a huge amount of coffee farms have literally died. There is going to be very little flowering here for the next harvest,” one coffee grower told SpillingTheBeans by telephone from Vietnam’s Central Highlands coffee region.

Over 20,000 hectares of farm land in the Central highlands around the coffee capital of Buon Ma Thuot in Dak Lak province have been hit by the severe water shortage and most of the land is dominated by coffee, local growers and exporters told SpillingTheBeans in reports sent from Vietnam.

Based on Vietnam’s average yields in coffee a loss of 20,000 hectares of land could result in losses of over 1 million 60-kilogram bags alone from that region.

Pictures taken in the last 2 weeks show entire farms completely wilted after the massive dry spell, that already has affected part of the current 2015-16 harvest and comes just as trees were supposed to start flowering for the next 2016-17 crop. 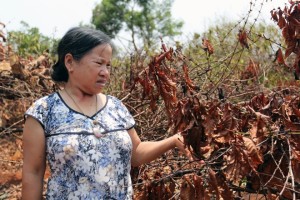 “Owners of coffee plantations in the Central Highlands region are bemoaning their dying plants, the dry season and dams built by the Hoang Anh Gia Lai Corporation have been blamed for the situation. The growers said they often used water from Ia Cham Stream but had recently found the stream is drying out. Families living close to Ia Cham Stream have been able to save part of their coffee plantations, but families further away face severe drought,” reads a part from the local paper the Mekong Witness.

“Grower Le Van Viet said he had struggled to find water in the past two weeks and feared his entire coffee plantation was at threat,” the paper said.

*Don’t miss our LATEST analysis on Vietnam’s 2015-16 crop that suffers from lowest yields in years: http://spilling-the-beans.net/market-insight-vietnams-2015-16-coffee-harvest-size-cut-short-by-old-coffee-trees/ 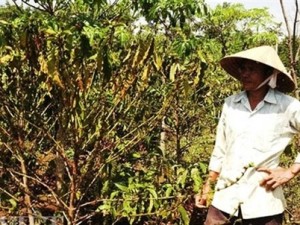 Unseasonably warm weather has been blamed for the drought, and made worse by the extended impact of climate change that has provoked an unusually powerful El Niño effect. The last six months have seen only half of the average rainfall recorded in previous years, according to Tran Trung Thanh, vice director of Center for Hydro‑Meteorological Forecasting in Central Highlands, who warned that drought conditions are expected to worsen this year and ahead.